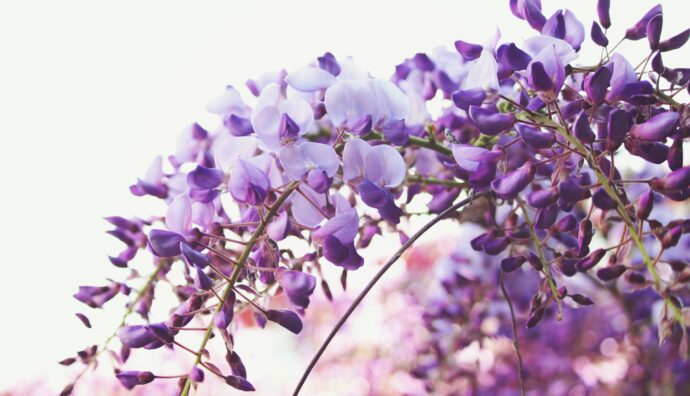 For the past year, I have been observing the growth of four wisteria seedlings …

I picked the seeds in a village in the heart of Sardinia, Sorgono, Italy and took them to my city, Turin.

It was the first time that I put the effort in an experiment of this relevance: taking seeds of a plant in pots kept on a terrace in a metropolis, moreover in a town in northern Italy, with a very different weather and climate from the place where the seeds and their originating plant, were
What I noticed was that in a few weeks I saw four shy and defenseless shoots emerging from the still beautiful, dark and nutrient-rich soil. From the beginning, I tried to protect them from the rainfalls, from sudden hailstorms, from the hot sun.

My care was so appreciated that the buds soon became plants with abundant and shiny green leaves. I was really proud of them…and of myself.

I was hoping to be able to enjoy soon the first little flowers, even if I knew that the plant was still too fragile to bear the weight of the wisteria flower: lush, lilac and very fragrant.

Soon I learned from a friend of mine who runs a plant nursery that a wisteria born from seed produces flowers only after at least 6/7 years from its birth and that these years are essential to the education of this vine with the aid of self-supporting and robust structures.

Honestly, I was immediately hurt by that. Nowadays one is no longer able to wait so long to see the fruits of his/her work. Now we are accustomed to having everything, right here, right now…One click away.

Within Aikido training, my teacher often reminds us that it is not so important the goal, rather the path to achieve it, lived moment by moment, with awareness and attention. That makes us who we are, making the difference.

Perhaps is it true? Why not! This is an opportunity for me to experience it. I want to rejoice for every single new leaf born from my tender plants, I want to overcome the concern for every attack suffered because of pests, I want to help my plants to grow by clinging to the structures that I have set for them and to grow stronger.

A year has passed and I can say that I have learned so much from this experiment, from this path.

It seems hard to believe but I can assure that the four tender plants, born from seeds of the same mother-plant, have four different paths of growth and, I must say four different characters. Exactly, just like children, each plant expresses its inner, unique, personal essence.

Only one of the four plants had -literally- an explosive growth that can reach more than three meters from the pot.
It has taken possession of the external tube of the gutter during some days-off we recently had… When I was back, I was shocked and worried about the damage that could have caused to the building. It is thanks to her that I made the decision to buy a huge metal arch on which I would have guided the growth of the four tender plants. (My husband can confirm his joy in devoting two hours in assembling this structure purchased online and, for sure, coming from China, where each element did not want to match the other …) With great delicacy and attention I managed to unroll the plant from the tube and the I re-educated this time again to the elements of the arched structure. As a result, a half arch is already covered by its leaves. The character of this plant reminds me of those children who from an early age seem independent, arrogant and eager to go to anyone who gives them a smile, a hug. They are not “mommy’s boys” at all. Soon they will find themselves studying away from home experiencing freedom and self-determination. I would call them: young adults.

The second plant is the exact opposite. It has grown less than a meter high, but it has strengthened its trunk more than all the others. It held on to the one-meter-tall stick I put last year, and it literally surrounded it over and over again. As soon as the end of the stick was reached, it stopped and no longer wanted to grow in height. The insecure character of this plant reminds me of those children who always cry. As long as they see a stranger, they cry, if their mother is distracted, they cry even more and if something scares them the cry becomes unbearable to the human ear. Such children will hardly leave their home and, if their parents won’t pay enough attention, they will never leave. For them, the comforts and certainties will have priority over the desire to get out of their shell and try to make their own family. I would call them: the eternal children.

The third plant has developed two twin twigs from the beginning. Both have grown hand in hand: slowly but progressively. They shared the same seed, the same earth, the same stick. Over time they became so strong that they did not need to cling to the stick. Their perfect balance is enough to make them grow in complete autonomy. It is a balance certainly worthy of admiration but, at the same time, worrying. What will happen if this balance will get lost over time? Will a new balance be created or will it be the end for both? This plant reminds me of those children who are always seeking for the “best friend” since kindergarten: that companion on which they can rely, growing together. They are that kind of children who grow up not accepting that the best friend in their childhood has also other friendships. In the period of adolescence, they consider as a betrayal the fact that their best friend preferred the company of a girl to theirs. The balance that has been formed at an early age, broke with growth and, for one of them, evolved into maturity while, in the other, it turned into victimhood. I would call them: victimized/paranoid children.

The fourth and last plant has a further characteristic of its own. It has grown above average but not so close to the first seedling described. It used the stick it had in the pot to take roots but, once it overpassed the stick, it continued its growth without a specific will. Compared to all the other plants, it did not harden the base, in fact, after a year, I was able to unroll it from the stick to roll it up to the new arch structure without any pain. It immediately took the form that I gave without complaining, without trying to unroll from that. In some way, it has made my task as an educator far too simple… This tender plant reminds me of those children without personality. As kids, they never have their own opinions and tend to follow the pack leader in every way. Not having strong bases, the first difficulties will tend to break them down but, if well advised and supported, they will be able to recover quickly. Despite the pain or violence suffered, they will tend to forget quickly and to rebuild their lives, apparently free, but at the same time fragile. I would call them: conformist/alternative children.

How many things I could learn in a single year of walking with my seedlings!

I wonder if in 6/7 years I will be able to admire the majesty of the flowers of my plants… I cannot know it because it is part of the future… but I am more aware of the fact that in a single year I have been able to learn a lot from them because the present deserves to be fully lived.

My teacher was right: if you keep the eyes and the heart open, every single moment, lived in full awareness, is a moment of growth that cannot be repeated because it is unique. Therefore we live the “here and now” with the awareness that we have a goal to achieve but that the path to follow is just as interesting and important for us … as well as for me.