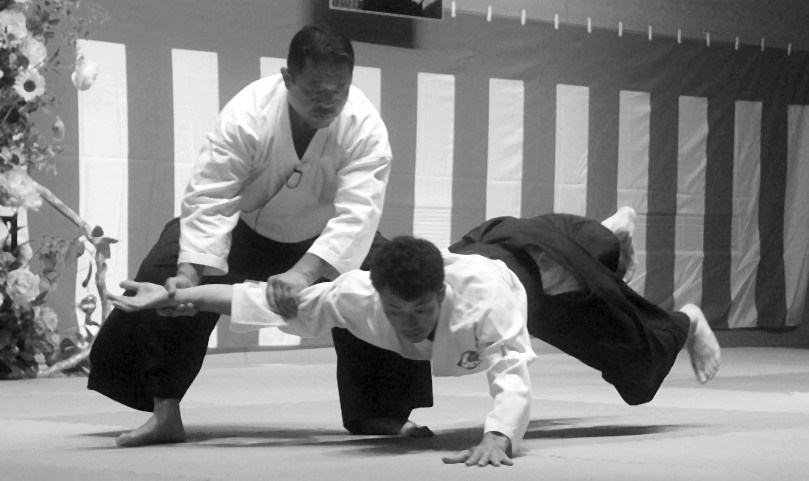 When we study the six basic principles of Aikido –ikkyo, nikkyo, sankyo, yonkyo, gokyo and rokkyo-  we fundamentally refer to the categorization provided by Morihiro Saito Sensei. He had the merit to significantly contribute to the understanding of the Aikido techniques and underlying principles. His didactic methodology still offers a complete “Aikido toolbox” both for beginners and advanced practitioners and represents a trustworthy decoder of the spirit in which O’Sensei codified Aikido.

Yet, O’Sensei Morihei Ueshiba didn’t classify techniques naming them in the way Saito actually did -and in the way we are accustomed to study them.

As Philippe Voarino Sensei well states in his article, O’ Sensei, when teaching what we call “ikkyo” , was used to refer to techniques using “ippo”. Please take a moment to read the interesting cited article. Briefly, ippo, to Japanese students of Morihei Ueshiba, sounded simultaneously with the meaning of “first control”, “first law”, “first direction”.

In order to spread Aikido outside Japan and making it accessible to other cultures, Saito Sensei made a choice that led both to a more direct understanding of “ikkyo”, principles, and a gradual loss of the integrated meaning contained in the word “ippo”…

Another Voarino Sensei’s article is focused on gokyo technique. Trying to avoid repeating what he states with mastery, it is worth noticing that what we are used to call “gokyo” is something that derives from a simplification choice of Saito sensei.

If taught as a disarming technique, gokyo -which wasn’t called that way by O’Sensei- slowly became a self-standing principle.

The point we want to stress here and eventually investigate a bit is that in most of the technical programs of various Aikido’s styles, gokyo is taught and requested only in its ura form, while there is a certain amount of multimedia content in which Saito sensei performs gokyo in the straightforward form, omote.

We refer to the aforementioned link for an exhaustive explanation of the inner technical nature of gokyo and we try to focus on the almost hidden characteristic of it. That is proposing a dual and complementary approach in respect to what it is studied through ikkyo.

We see this kind of symmetrical duality and integration almost everywhere in the techniques of Aikido, from suburis to tai jutsu. Probably this is the reason why gokyo was introduced.

Within a sequence of movements, angles and lines that are geometrically equivalent to ikkyo, its starting wrist grab position it’s the sole noticeable change. By inverting the polarity of the grab, with respect to ikkyo, gokyo allows to explore “the other side of the Moon”, asking tori to take the point of view of uke, which doesn’t happen with ikkyo.

Therefore, while it’s rather clear how gokyo works and how it has to be performed so that it can be effective in disarming an attacker with a knife, it could be not that clear what should be the purpose of the technique in the perspective of self-development.

That could be regaining the dimension of the complete integration of the attacker in the non-duality setting that makes a conflict a tool for evolution.

This is probably the reason why Saito sensei introduced gokyo in both forms, omote and ura, which give both the opportunity to discover again that non dual principle thanks to the duality of the directions.