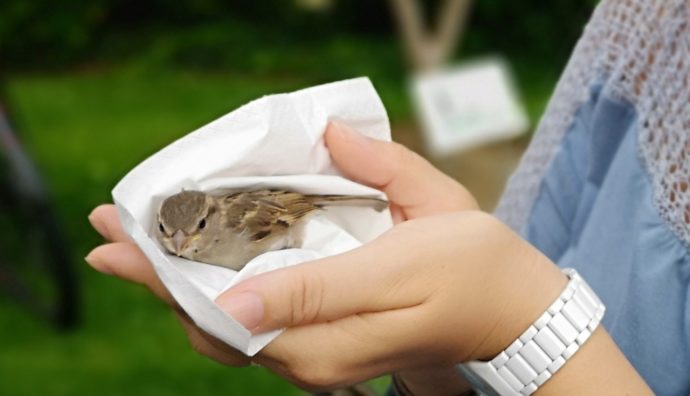 A few weeks ago we were in a garden next to the main road of a small village. A lovely sunny day, blooming trees, songs of birds flying around us.

In this idyllic, almost sugary Disney-like frame, our gaze was drawn to the silhouette of a small female sparrow. A little ball of feathers with a beak and a short tail that was chirping quietly on a twig. Suddenly, its decision to take an uncertain flight to stop just in the middle of the road.

Country roads are not very busy. But if they really must be crossed by a vehicle, this must necessarily be a SUV that, regardless of the group of sparrows in the middle of the road, decided not to decrease the speed.

Thus, the little sparrow, trying to avoid the car, was hit by the SUV’s body, falling on the ground.

In itself this story would be a small story, almost meaningless. Millions of lives, human, animal and vegetable, turn on and off daily. Most of the time in the quietest anonymity.

But we share this because it is what happened later that has something to tell us.

Seeing the silhouette of the sparrow on the ground, motionless, I felt anger at the insensitivity of those behind the wheel. A sparrow is a sparrow, all right. But not taking care of small and defenseless details usually leads to not taking care of larger and more complex situations.

I also issued my sentence, saying to Sara: “It’s dead, forget it.” And I stood there, in the discomfort of the child who sees the Disney cartoon ruined.

Conversely, I notice Sara walking towards the silhouette of the sparrow, pulling out a handkerchief, picking up the small bird, moving to the roadside and placing it on a shelf.

“She’s gonna disposing of it” I thought.

Yet… The sparrow, no one knows how, survived the accident intact. It had been freezed, unable to react. Its heartbeat like a machine-gun, but its eyes lively. Paws, wings, neck, tail … everything incredibly intact.

Placed near a bush, after a few minutes, in a flapping of wings it hid itself, while one of the parents, from the tree next to it, started to go down to recall it. The next morning it was there, fluttering again between tree and bush. The happy ending, incredibly, has found a way to take shape.

This small story has exposed some characteristics of my reactions. After all, at that moment, the brain of a sparrow, as big as a hazelnut, behaved exactly like mine. Faced with the unexpected danger, the sparrow has totally paralyzed itself. I stiffened in judging what I had seen. I would have left it there, because as far I’ve seen it was already dead.

With the result that it would have been really smashed by another car.

Instead, only those who have the courage to make contact – even physically – with what enters in our range (physically, emotionally, relationally), can really see.

Beyond the sentence already issued.

You can cure the prejudice. You have to take… Care. Of oneself, of others, of little things. Paying attention in being in the present and not in what we believe is going on. Because sometimes, what’s obvious is not obvious at all. What is of little value to our eyes reflects the smallness of our judgment, our immaturity, the fear that generates it.

How many moments thrown away, how many relationships ruined, because literally pre-judged. How many opportunities for personal growth postponed and therefore dispersed: in our experience of students, of workers, of practitioners, of believers, of sons, mothers, fathers…

The “here and now” demands humility and sometimes a sparrow falls to the ground just to remind us that. Thanks to life and thanks to Sara for helping me to open my eyes a little more on what I thought I understood as a child and that I had never actually “seen”.

Are not two sparrows sold for a penny? Yet not one of them will fall to the ground outside your Father’s care. And even the very hairs of your head are all numbered.  So don’t be afraid; you are worth more than many sparrows.