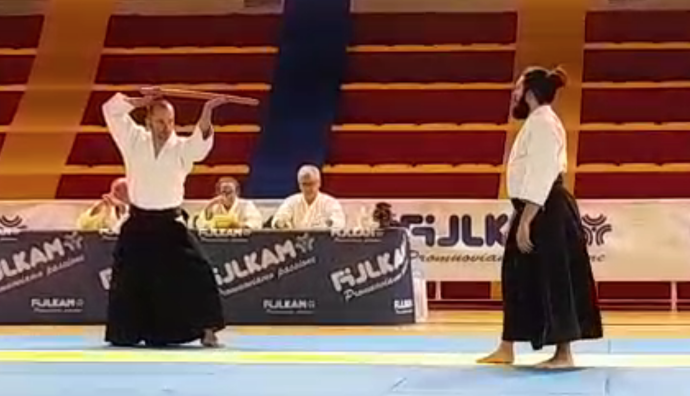 At the end of the FIJLKAM (Italian Martial Arts’ Federation) National Seminar, held from 29 to 31 October in Leinì (Turin), Sara and I had the opportunity to take the second Dan test.

This completes a process that started last August 3rd in Montreux (Switzerland), when we took the nidan Aikikai test in front of Patrick Cassidy Sensei. In the path that is proposed to us at the Dojo, we are given the opportunity to certify our growth both with certificates that are valid in the community of practitioners at an international level, and with a trajectory of tests that have value in our Country.

This double level – which for us is triple, because the process of qualifications for technical teachers is added – certainly involves greater commitment from all points of view. But it allows us to experience unique growth moments.

The real prevails over the virtual

For us, the National Seminar was the second intensive seminar experience after the pandemic. Before it seemed almost normal to go around Italy and Europe once, twice a month or more. It was great to be able to return to this kind of activity.

We felt through our body, our being, how important it is to be able to deal with a larger “us”. The long months of activity deprived of contact and therefore in solo mode; the work necessarily “limited” to the practice with the usual familiar faces… All this made it possible not to extinguish the flame, of course. But it has also loosened that ability to quickly adapt to people who don’t know each other, who practice different styles. We had an important indicator of how impactful this historic moment has really been for practice.

In the same way, we are extremely grateful to those who, in our Federation, have had the courage and stubbornness to wait for the conditions to offer a real and not virtual moment in which to experience the tests.

A year ago a giant organizational machine was able to keep the federal Aikido community together thanks to online events. It seemed, at that time, that even for Aikido what was applied in Judo and Karate should happen to prevent the pandemic from blocking the flow of the recognition of ranks and qualifications.

Forcing yourself to accept a stop, makes you appreciate the taste of reality more. Being able to express yourself on a mat, with real people, and being evaluated for what you show in the three-dimensionality of a facility and not in the two-dimensionality of a videoconference is a privilege that is worth any wait. Although it is evident that, compared to the pre-Covid world, we are all two years older and we are in athletic conditions that are not yet optimal…

… But are there any optimal conditions?

Sara and I reflected on the conditions in which, in our Aikido path, we showed up ourselves for tests. As per tradition, once again, we got on the tatami with several “lights” on our dashboard.

Indeed, it is Nature that every day offers us a picture so perfect that it seems normal to us. A caterpillar that becomes a butterfly, the water that solidifies into ice, the ice that rattles when it melts, the cry of a child being born…

There is no change of state that does not require abandoning the before forms for a totally different after.

There is no change of state that does not require a drastic exchange of energy.

And in fact, if each of us retraces the salient moments of our existence, we can very well certify that behind and within those moments there is a total transformation that often has the appearance of an unspeakable effort.

Who knows, when two thousand years ago St. Paul wrote to the Romans: “We know that the whole creation has been groaning as in the pains of childbirth right up to the present time.”, he probably contemplated the common situation of every man and woman of all time.

Whether it’s a job interview, a test at school, a Dan test… Behind and inside that effort there is the portal to expand the boundaries of your growth zone, which will become the new limits to deal with in the path of each, which eventually becomes the path of all.

After the test we attended the first “Aikijo Experimental Taikai”.

We hadn’t competed in official venues for a long time. Having done it, moreover as a couple, and being evaluated with the highest score in our category has awakened long-dormant emotions.

It was great, because we like to participate in initiatives that have the courage to explore new perspectives. We have appropriately reflected on O’Sensei’s phrase in “The Art of Peace”: “The Art of Peace (Aikido) consists in realizing what is missing “. Certainly Aikido lacks a methodology that allows, in a totally free, objective way and free from ordinary practice in the Dojo to which one belongs, to reckon and make… peace with the competition.

It was difficult, because the outcome of a competition is a label that, especially for those who “win”, is very difficult to detach from immediately, as it should be. At that precise moment, in that context, with those people, you could probably be the best but, just like any test, a second later it starts all over again.

The deviations that we experienced in our sporting past in various sectors were important factors in our abandonment. We consider it very intelligent to add, as it has been done, a proposal that takes nothing away and imposes nothing on practice. At the same time, we believe it is essential for each instructor to monitor and act so that the part of the competition is in fact a free expression of the practitioner, not damaging anybody’s path.

In other words: none of us had tried anything before the event.

It was liberating because the moment of competition allows us to frame better and without too many words where we are going. Whether on our own or with others and where. Whether strolling around, around ourselves or towards the personal growth of each one.

Com-petition, moving towards one goal together. And that’s the beauty of Aikido practice.