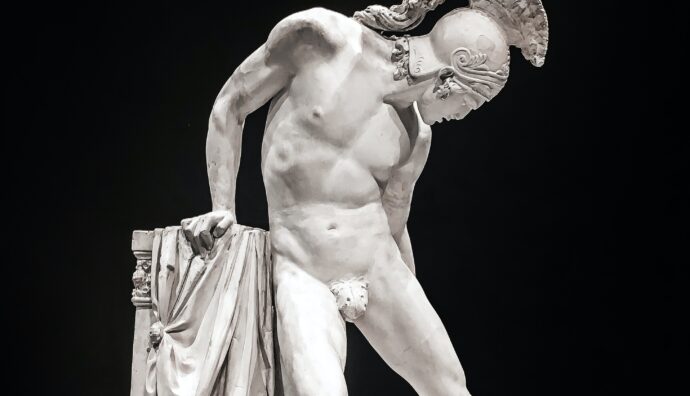 This time offers, probably also for the concept of martiality, a chance of evolution.

Greeks defined the god Ares as brutal, murderer and above all βροτολοιγός, destroyer of men. He represented the concept of the ferocity of war, of the blood war demands, of the total destruction of the human community war generates. A god as scary as unavoidable.

Romans replaced Ares for Mars. Mars, with Rhea Silvia was the mythological father of Romulus and Remus: Romans perceived themselves as descendants of divine lineage, of a god who was originally the god of fertility, of abundance.

In fact, Romans defined Mars as shining, perfect, protector of the woods. But also obviously the one who goes into battle. It is interesting to note that, with an indolently Italic trait, he was also defined as incostant and avenger.

War is war, of course. Yet the god who embodies a concept which evolves. He is no longer just a fierce god. Rather he is a god who would like to stay calm, take a stroll in the countryside, possibly dating with some beautiful girl. War is a cruel duty, a kind of job or a response to an offense. But a peaceful condition is the main target.

This, roughly, is the sense of martiality that has shaped the mentality not only of Italians but of many areas of the world during these last two thousand and eight hundred years.

History is a constellation of traumatic events. A trail of blood and atrocity that spans the centuries. So far, from the WWII on, in much of the Western countries, we live in a bubble in which belligerency takes equally raw, yet not military, forms. Elsewhere this is not the case, in the blissful indifference of those who, despite everything, are cozy and warm in their homes.

We translate budo (武 道) as martial way. Many pages have been written on these ideograms. We talked about them too. How 武 reveals the will to end a riot or a war using some weapons. Semantics that see war as a tool in order to achieve peace. Combat as a last chance after every attempt has been done.

And if this interpretation merges with the most popular interpretations when talking about Aikido as the “art of peace”, to what extent those who step on a tatami can be defined “martial artists” ? Especially since that little phrase that is deliberately ambivalent: Aikido wa ichiban budo desu 合 気 道 は 一番 武 道 で す: Aikido is first of all a martial art / Aikido is the best martial art …

What is martiality? And how has it evolved in this parenthesis of Covid-19 which is gradually closing in the coming times?

Are we Ares’ great grandchildren? Bloody destroyers of others’ joints just because “after all we all come to the Dojo to sweat and not to be ballerinas”?

Are we bipolar great-grandchildren of Mars? When we are triggered, we beat others with fury, just to settle down, in a moment, acting like vanilla Buddhas?

Are we “martial” in the sense that we have become more or less unaware soldiers who need the caress and whip of a general, because it is more convenient to copy a personality than having our own? And, if so, why do we fight others’ battles and wars?

Perhaps it would be appropriate to start being martial again because it is in …March that life is reborn, with spring that mysteriously and unfailingly binds heaven and earth in a promise of life.

Our practice may have a thousand labels, all of them with a value. It can be traditional, it can be dynamic, it can be sincere. It can be many things.

But fundamentally it must be alive, open, welcoming, capable of helping oneself and others to remove fears. Capable of dialogue. Capable of action and imagination. Able to extinguish the war by understanding the conflict and to feed the chances for fruitful growth. In real as in virtual.

Basically Homer already thought so in his Hymn to Ares:

Hear me, helper of men, giver of dauntless youth!
Shed down a kindly ray from above upon my life,
and strength of war, that I may be able to drive away
bitter cowardice from my head
and crush down the deceitful impulses of my soul.
Restrain also the keen fury of my heart which provokes me
to tread the ways of blood-curdling strife. Rather, O blessed one,
give you me boldness to abide within the harmless laws of peace,
avoiding strife and hatred and the violent fiends of death.

Disclaimer: Photo by Miti on Unsplash