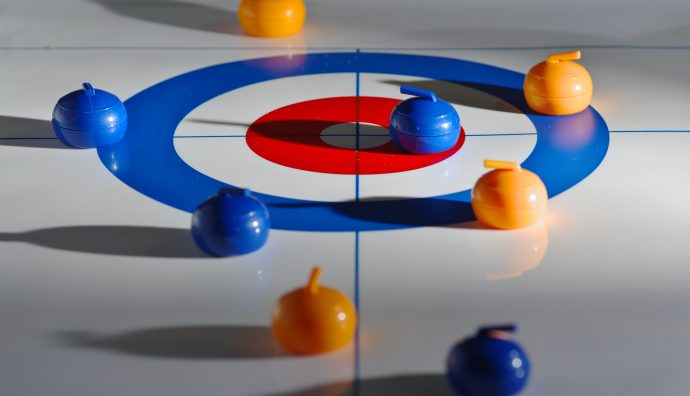 Stefania Constantini and Amos Mosaner won the gold medal at the Winter Olympics that are taking place in China, news reported yesterday.

Winning an Olympic medal is an exceptional event for an athlete and for the nation he/she represents. Two Italians who win the gold medal in Curling is even more unique news.

The media, we all know, are on fire for news like that. As well as, in a twinkle of an eye, they send back into oblivion the protagonists of these stories, their names and their epic achievements. Before this happens, the news can be used to make some reflection about the bizarre condition in which practitioners, technicians and athletes of “minor sports”, like also Martial Arts are seen, live.

In Italy, Curling has an institutional home in FISG , the Italian Federation of Ice Sports,and has little more than three hundred registered professional athletes, a number of practitioners of a few hundred people and three training facilities in Italy.

Doing two quick maths, there is an evident disproportion between the cost of the facilities, the organizational structure and the size of the movement. For example, in Trentino there is talk about the building of a new facility , with an estimate budget of 180 million Euros which obviously cannot be recovered from the fees of a group of Curling practitioners… (and not even from others ice sports practitioners)

It is touching to read the reports on the growth of the movement immediately after the 2006 Olympics held here in Turin. They talk about pioneers, passion, the problem of poor visibility, the need to start a path in synergy with school world…

In Aikido too weshare a lot with our Curling friends.

We too are few (certainly less than our cousins ​​of Karate, Judo, Ju Jutsu and TaeKwonDo, which however have the same problems like us); we too have little visibility, little attraction for sponsorships, little or no generation of related activities.

Also within the FIJLKAM , as indeed happens in the FISG, gems of absolute technical value are born, recognized both in the Olympic and international events.

Coming to Sport we can build an important part of the society we want to be. In the face of a very small part of sportsmen who move bunches of money, there is and always there will be the majority of people who, on balance, will always pay to be able to express their passion. There will always be a negative balance between facilities’ costs and expected economic outcomes.

So, now that with the national recovery plans huge rivers of money will be allocated also for building and renewing sports facilities, there may be an opportunity to remind us all that some investments have a return that exceeds the financial and economic metrics. That allowing physical exercise in aggregate form, that nurturing the spark of a passion, that making the citizen feel like a subject who has the right to pursue his own well-being even outside the job patterns of society… That all this it has value, not just economic but social.

We want to be optimistic and we’d like to think that Curling has taught us a lesson. May the celebrations of these days not be a blow in the towel that makes us forget that certain Palacurling made for the Olympics had been transformed into a car depot . That the world of institutions understands that facilitating the dialogue between sport and school is not just a political make-up operation but the real interest of the youth. And that each of us has enough passion to win our medal every day.