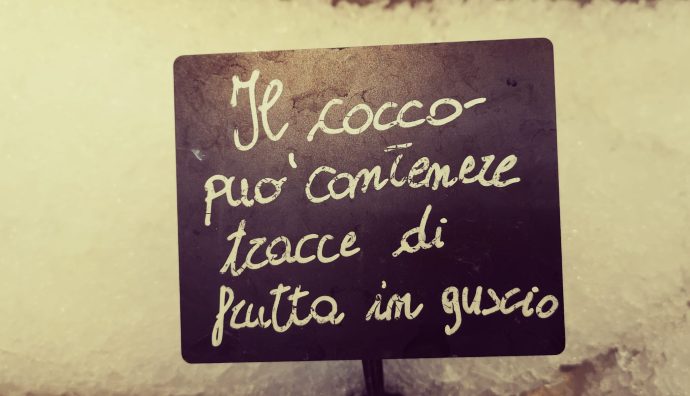 This was what Morihei Ueshiba said about seventy years ago. Beautiful, isn’t it?

However, we live in a world where, in a mall, there is the need to warn customers that a coconut may have traces of…its shell in it. A world that often stresses the obvious without bothering to go beyond that shell. (The consumer should be aware about “which” nuts are present, to avoid allergies, but this is another matter concerning the European regulations on food labelling and that is definitely off topic).

There is no doubt that, in practice, the formal aspect is essential and important. Formal training facilitates the practitioner’s entry into a perspective that does not initially belong to him/her.

Although formal and yet, at first, incomprehensible, practice immediately poses elements that trigger deep and enduring emotional processes. Physical contact with strangers; the request to fall and rub our own face where others put their feet; the perception of being incapable of repeating movements that our brain understands as trivial; being stuck to the ground or grabbed… In short: there is enough material to move many components of our being.

Yet you can choose to turn away and ignore this dimension. The technical progression can objectively lead to very beautiful forms. However, even the most beautiful pearl comes from the continuous work of the oyster that constantly wraps a flaw, smoothing yet not removing it. One can be “beautiful” but with mountains of dust under the carpet, as one can be “very spiritual” but unable to walk. Nor to realize that the person next to him needs a smile.

And even if only the technical and physical dimension existed, are we really sure that mastering the technical program is synonymous with depth?

How many stages, how many seminar, how many “special keiko” you live in which you already know where the sensei will end up, how his uke will behave, what you can do and say and what you cannot do nor say in those environments. How many times have you had the sensation of the very same heated soup? Same proposals, same sequences, same words…

As for the way of communicating our disciplines, is there any chance of being able to engraft our experience, of us who are “here and now” on something that is part of a tradition and communicate inside and outside our community of practice “ancient things with new languages ​​”? Or are we doomed to listen and in turn repeat: “Aikido (or any other discipline) is a martial art blablabla samurai blablablabla Japan blablabla harmony blabla peace blabla efficacy blablabla defense blabla godzilla blabla budo blablabla”?

Repeating and reiterating the obvious – or what is obvious to us – is a reassuring shell within which we can have a shelter and have the excuse of never putting friction between ourselves and the outside world. That friction that makes us so tender when we see a child laboriously take the first steps but which causes so much fear (and as much effort) on us adults. Not for the sake of questioning what we have achieved but to have the courage to look beyond.

It’s…a lapalissade two plus two equals four. It is useless and even a little sick to question it. But if what we already know is repeated and not only doesn’t satisfy that feeling of incompleteness we all experience but stifles curiosity, what good is keeping oursleves in such situation?

What if we discovered that under the shell of our form, our roles, our communication, there was something more than being a form, being a role? What if we discover that we are “also” human and that being so, however risky, is richer than continuing to be superficial?