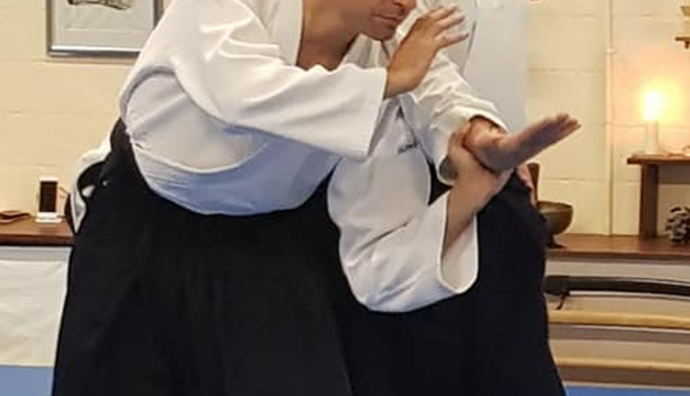 It is reported that Morihiro Saito Sensei, during the dan tests, was very often focused just on the execution of katate dori tai no henko (片手取り体の変更) technique, thus dismissing the candidates, promoting them or not.

Within the codified list of Aikido techniques, tai no henko is certainly one of the most useless tools in terms of combat and physical immobilization of the attacker.

Yet, in fact, the more you practice it, the more this sequence of movements shows everything that is needed during a growth path in the discipline.

Centrality, relaxation, breathing, connection, extension, grounding, intention, balance, fluidity, precision, intensity, clarity, solidity, freedom… These are some of the qualities that the technique requires and reveals over time.

Therefore, if we move from the physical to the relational and emotional level, tai no henko effectively demonstrates that imbalance occurs due to the attacker’s intention to keep himself faithful to the grab he has decided to act; that in the end “attacked” and “aggressor” resolve a situation of blocking conflict by finding themselves both looking in the same direction; that the integration of the attacker in a non-dual perspective literally co-creates martial action.

As the technical complexity develops over months and years, the Aikido practitioner, like any practitioner of a discipline, learns an increasingly elaborate grammar. One becomes able to respond to and dialogue amid the conflict with a wide range of elements and solutions.

However, it is common experience to hit the limit. Even in the best physical and technical form, sooner or later there will come a moment of practice in which in the face of an attack the response will not be so fluid, immediate, spontaneous.

Then it’s time to step back to the founding element. To that condensation of principles that we find only in tai no henko. And with great humility we start from there -from that point where, moreover, it is not so true that everything is immediate and easy to perform.

From early youth onwards, limits are experienced in relationships. We all tend by nature to have a peaceful and rich life in interpersonal relationships. Often we do not understand why with that particular person or at that particular moment or in that context, despite the best of intentions we simply do not like us all.

Yet that’s what we all more or less think: how is it possible that such a brilliant, polite person with such a big heart like me, is not accepted, understood?

Martial Arts are rightly believed to help practitioners develop a culture of respect in interpersonal relationships.

Tai no henko teaches us that sometimes, all you can do with a person is just being with him/her while looking in the same direction.

That sometimes it is simply not possible – or it would be absolutely fake- to twirl together, to chain amazing techniques, to project a practitioner into orbit.

That in reality the techniques are often dirty, insecure, arid and that precisely for this reason we are surprised when the spontaneity in which there is the perfection of the gesture blossoms unexpectedly.

There is something incredibly deep in this… very boring technique, which speaks about us, as well as the quality of our practice, much more than many items of the technical program that are so well displayed in so many promotional posters of classes and seminars.