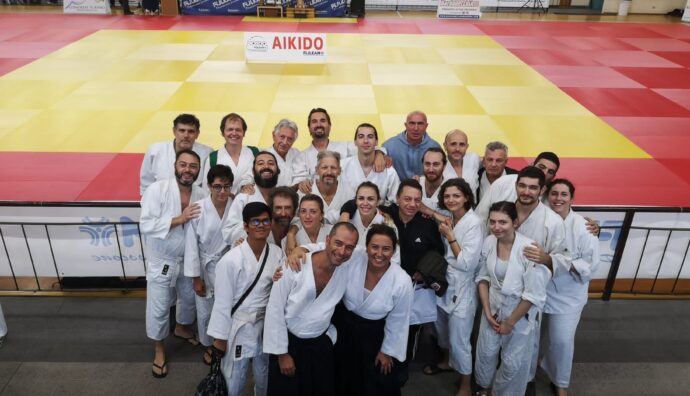 The annual FIJLKAM (*) National Seminar was held from Friday, October 14th to Sunday, October 16th. For the second year in a row, FIJLKAM organized this event near Turin, in Leinì, in the local “Sports citadel”. Piedmont, in 2022, has been awarded as “European Region of Sport”: the efforts of Italian Olympic Committee, the Regional Committee and the various stakeholders are transforming that “citadel” into a center of excellence for Martial Arts.

In conjunction with this event, just to stay in northern Italy, at least four prominent gatherings took place. In Emilia there was a seminar led by Yoshimitsu Yamada, president of the United States Aikido Federation and one of the few active teachers to have known Morihei Ueshiba. In parallel, in Bologna, Laura Benevelli and Marco D’Amico led another seminar
In Veneto, two prominent Aikikai teachers led a special class (Donatella Lagorio and Carlo Raineri). Finally, in Turin, Manon Soavi conducted a course in Katsugen Undo and Aikido according to the school of Itsuo Tsuda. Also in Turin, it was expected a seminar by Christian Tissier, later cancelled.

Concurrences are a problem when a single Dojo organizes an event and finds others overlapping, due to lack of communication, just minutes away. Those who have some experience in association life know that this is so disappointing, because if you really can’t work as a network, at least it would be nice not to cannibalize each other.

But when the dimension is national, concurrences cease to be a problem. They become an opportunity and a chance, in freedom, to exercise the responsibility of choice. In some ways, they represent the vitality of a movement that, in its totality, still moves the passion of so many people who believe that it is worthwhile to invest time, energy and resources, in the exchange that takes place during an event of a certain dimension.

The richness of an event lies in the polyphony that is self-composed by the exchange during the practice. The polyphony is all the richer the more participants come from different training paths. One does not always have the desire, patience or ability to immerse himself in an uncomfortable environment; just as one often needs an intensive course on certain details of the style he practices.
In the long run, however, a question of meaning and purpose must be asked: to find oneself (always) doing known things: to what extent is it good? Under what conditions does the pyramidal event (i.e.: the master who cyclically visits Italy/Europe/world and teaches more or less in the same way no matter the audience he speaks to) become formative nourishment for those who attend his events? And finally: if a row of “pyramidal events” formed a rather homogeneous mass of practitioners, both in the middle and beginner ranks, could we really speak of polyphony or should we not speak instead about the “usual refrain”?

The approach that the national seminar has been following in recent years is marked by an attempt at collaboration among teachers that allows those who participate to listen to multiple voices and challenge themselves by confronting the same principles declined by the styles to which they belong.
Until not too many years ago, the federal program for dan tests coincided with the program of the Iwama Ryu style. The necessary recognition of other paths led to a slow, incremental, necessary process of opening up and valuing other schools. And the seminar has become a matrix experience, in which proposals alternate, letting participants to choose. A wide choice, not infinite, yet this year it ranged across a spectrum from Iwama Ryu contaminated by the personal research paths of teachers like Marco Rubatto Sensei and Fabio Ramazzin Sensei, to the Aikido of the Kai Shin Kai and the perspectives of Seijuro Masuda’s teaching brought by Raffaele Foti Sensei, and going on to refine itself in the Kobayashi Ryu of Nuccio Iuculano Sensei and Giovanni Desiderio Sensei, with his experience in sword schools.

It will be said -and rightly so- that didactically Aikido is broader than that. While waiting for the presence of other styles to grow in the future, we would be forgiven for saying that this is already enough to short-circuit the average practitioner. Who finds himself all of a sudden on a tatami where the technical language changes every hour, pushing him not only out of his comfort zone but more importantly toward four possible outcomes (in ascending order of probability):
(a) seeing the light and becoming like Neo from the Matrix able to change style and mode of practice like a chameleon;
(b) reject the technical proposal and take refuge on the tatami board (it is sad to see this attitude in some senpai);

(c) accepting the technical proposal, failing to decline it physically, and slipping more or less slowly into physical automatisms of one’s own school;
(c-bis) ending up practicing with people known to go under pace;
(d) staying within the technical proposition, exalting oneself for that one time out of ten that the movement succeeds smoothly and accepting that small amount of frustration in the remaining nine times.

You feel yourself a little dizzy: the system does not understand much and the head does the rest. Since this is a kind of seminar that must necessarily work on principles because it is also a training time for teachers, the details are subtle even though the techniques perhaps have familiar names. Result: feeling of being in a spin dryer at 10000 rpm.

Taikai, competitions, Doshu’s statements …What masagatsu agatsu are we getting to?

Last year, a jo taikai had been introduced experimentally in the national seminar. It was a small tournament, with its own embryonic rules that included the possibility of performing kata individually, in pairs or in teams of three participants.
This year the experiment was consolidated into a more structured proposal.
What can be said? Outside the federation, this “novelty” has elicited different reactions. There are those who cried out in scandal, ringing the bell of “Aikidohasnocompetitionatalleventhedoshuwroteamessageaboutthatforsuburissake”. There are those who looked on with curiosity. There are those-and it seems the majority-who were completely indifferent: I take care of my garden, Fijlkam does what it wants.

Within the Fijlkam practitioners probably some raised eyebrows but apparently there were no major contrasts.

Many reflections can be made. The first, of a general nature, is inspired by a concept of “equal opportunity” and thus “equal dignity.” Aikido is a niche and there is no doubt about that. We are considered as the poor cousins of the less-but-still poor karate and judo. A slow process of equalization with the other Martial Arts represented is under way in the Federation, and this is good in every respect.
Conversely, parification, in terms of the architecture of organizing a movement, brings with it the instance of wondering how a competitive sector might be structured in Aikido. Hence the experiments to understand what kind of trajectories to propose.

The second reflection, on the other hand, takes the practitioner’s perspectives. Not only because, by participating, he or she can actively help shape the Aikido to come. But mainly because the moment of a tournament, so far still very unstructured compared to, for instanve, similar national Judo or Karate tournaments, gives back to those who take part useful elements for their own growth path.

Let’s face it: dan tests do see failures, it’s true. But they constitute exceptions to the norm: if you prepare it acceptably on average, you pass the exam, albeit with all the effort involved.

The tournament is different: a photograph is taken in those few seconds. Of course, the picture represents that moment and does not take into account who you are, where you came from, and where you can go in the future. But it has the virtue of that brutal frankness that, all things considered, should not displease a Martial Arts practitioner.

And there, who you are, your rank, your eventual pedigree counts for nothing at all: you find sixteen-year-old kyu who perform as fluidly, determinedly, centered, relaxed, and full a kata as you find forty-year-old dan who run a thousand miles an hour but forget a frame and foul up the projection lines. In any case, you take the result, shut up and take it home as an element of technical and character evaluation to aim for improvement. Without drama but without hiding behind the finger that “basically everything is all right.”

So: let us continue to tell the fairy, true, tale that “masagtsu agatsu”: the best victory is really the one over oneself. But, please, let us not despise a priori the attempt to give tools, to the community of practice, to decline in the real world such a high concept as “victory over oneself.” Otherwise, the mouth says very right things while the rest of the system does not have the courage to confront that concept.

It is obvious that vigilance must be taken to ensure that the prospect of competition does not become the obsession of those who want to participate in it. This needs to be worked on, because the risk is there. Kind of like those people who in the months leading up to their test monopolize their training and rehearse their techniques over and over again. Not that useful.

Just as it is also necessary to be vigilant that these occasions do not give rise to the building of enmities, suspicions, envy, jealousies between societies. All these things exist where there are competitions.

How do you keep being vigilant? Certainly by keeping everything in an extremely relaxed atmosphere, where, as is abundantly repeated, the tournament is and remains a time to challenge oneself, where one can offer a small representation of one’s Aikido, leaving it extremely optional to enter, as any competitive field should in fact be.

Ending up
We are all beings with wide margins for error and therefore even wider margins for improvement. This applies to individuals as well as to aggregations. In the institutional greeting of the IOC presidency, it was made quite clear that, after the difficulties of the pandemic, the energy and economic situation will jeopardize the survival of many association realities. Literally translated into practice: carrying out the activities we took for granted will need everyone’s commitment to keep surviving. Being part of a movement rooted in institutions also offers this kind of perspective: a home with open doors, with rules, and with the ambition to be able to brave the storms in order to provide a suitable environment for personal growth for those who want it.