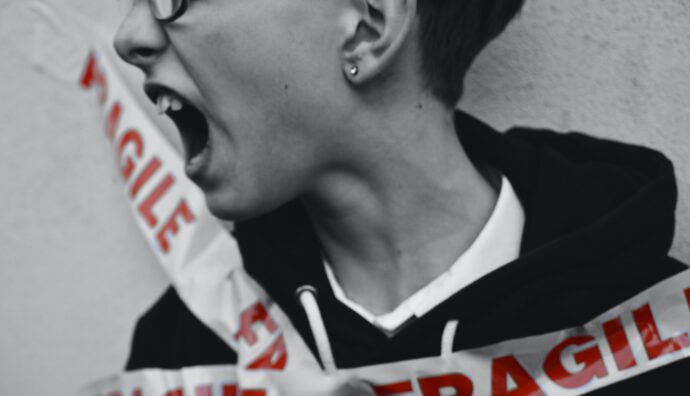 The topic of self-defense is very vast. For somebody, it is the only topic that matters. For others it is a kind of taboo. For many people, it is almost sacrilegious to associate it with the practice of Budo. Since we hear, say, and do a little of everything, let’s try to make a point on the basis of what we’ve had the opportunity to experience over recent years.

We are two people who study and teach Aikido to adults, children, and adolescents. A discipline that originates from the concept expressed by the founder, Morihei Ueshiba: “the greatest victory is over oneself”. A path that, through the in-depth study of martial techniques, basically aims at a progressive overcoming of that dual perspective in which we are all immersed, especially during conflict situations.

At the same time we are people who had direct experience -first in volunteering, then in our jobs- of the effects of a world that “still” thinks according to dual perspectives. And so we try -for example- to balance the iniquity of poverty with a charity; an attempt is made to contrast youth discomfort with more or less articulated educational activities; a client is assisted during a conflict situation with legal and economic implications so that an acceptable level of coexistence between the parties and in society is restored.

A few years ago, very shortly after we ranked black belt, we were involved in Dr.’s Fulvio Rossi “Nonpiùindifesa” project. Within an initiative organized at the Turin Court Gym and intended for a female audience only, our role was to support the teachers who guided the season. Various events, including the pandemic, changed the location and teaching methodologies of the courses. However, for us, it was an impact with a submerged world, vast and problematic.

If we have learned anything in the years of volunteering, it is that some critical situations, such as poverty, bullying, and domestic violence, are very difficult to be put out and therefore it’s hard to help. An emotional, economic, and physical tangle makes it difficult to reach those in need.

Certainly, while trying to live, by practicing it, a discipline that trains and develops the truth that deep down…there is nothing that needs a defense, we have been able to see how many people -and not only of the female gender, however prevalent- feel in the problem of defense vividly.

We therefore gradually entered the orbit of the theme of violence prevention (private violence or gender related) and we have realized how much the “defense” theme is transversal in all contexts of social life.

We came into contact with local and national realities that in the NGOs sectors and in education seek to provide tools to counter various forms of violence at their beginning, assisting the recovery of those who have already been soiled by it. From those aberrant forms ov violence impating children to the slimiest forms of economic violence. From the creeping phenomenon of school isolation and bullying to anti-violence and support centers for the integration of migrants.

Thus, what by profession often remained the expression of high-level (and therefore aseptic) planning with national and European institutional bodies operating in the Defense sector, has become evident in its local reality. And this requires an answer.

It was therefore natural for us to enter the training course for FIJLKAM technicians who want to become teachers of self-defense methods (MGA: Global Self-Defense Method).

In recent years, training gathered technicians from all the martial and fightinh disciplines represented by the Italian Federation. We, therefore, benefited from an exchange with other teachers, including European level athletes and Olympians – and this type of practice would be worth the price of the show.

The training was, technically speaking, entrusted to the greatest Italian representative of Hontai Yoshin Ryu, a form of traditional Ju Jutsu, M. Luigi De Falco. We worked with him not only on principles but on how to relate to a totally non-cooperative individual, to the point of immobilizing him without becoming his aggressor in turn.

The physical aspect was combined with training in the legal field with the interventions of Dr. Rossi, who illustrated extensive case histories experienced in his experience as a prosecutor, and Dr. Bellone, a psychologist.

Every didactic is situational, as the outcome of possible aggression depends on the real situation.

It is clear that the operational reality experienced by a specialist in the armed forces is different from the bullying suffered by a teenager.

Can a Global Self-Defense Method be an answer for everyone’s needs?

Let’s try to identify some profiles:

And from the point of view of a Martial Arts practitioner, is all this useful or not?

We can say that one of the main misunderstandings related to self-defense lies in the belief – or at least in the habit – that mastery of a martial discipline can automatically offer a didactic and practical tool useful for preventing an episode of violence or leading it to a kind of solution.

This is a huge perspective mismatch, nothing but a cognitive bias. We have all experienced it during the courses. What works in every single verticality of practice is subjected to many more variables in an operational context. Disciplines that have a strong sporting emphasis could confuse competition combat with the behavior to adopt in a situation not framed by regulations. Other disciplines such as “our” Aikido or Ju Jutsu – but also fighting disciplines- are based on strong skills of nullification of a threat through immobilization -or the breaking of the joint chain. All this, however, without ever having been able to experience that damned word which is the demon of many, inside and outside the dojo, that is continuous effectiveness over time. It would take too many orthopedic surgeons and too many lawyers to arrive at reliable and up-to-date statistics with respect to the chronicles of the Japanese Middle Ages.

It, therefore, remains on the theme of “defense”, and perhaps it is a good thing, an open area. That no Martial Art manages to control by itself. And on closer inspection, even the elite departments are always looking for improvement in their methodologies for responding to a conflict situation.

From the perspective of Aikido practice, this is very interesting: unconventional attacks force the understanding of the principles on the one hand and above all strengthen the “why” behind the finalization on the other.

The “why” that emerges also make us appreciate the aims of the teaching methods we are accustomed to. Under these conditions, even if all that has been said up to now were not valid; even if there weren’t an active involvement in the training of a large audience, the study of a defense method under the guidance of expert and intelligent teachers has beneficial implications for the practitioner.

In conclusion: if it is clear what the MGA has to give and say to society, what can Aikido offer to the MGA? Where other combat disciplines are specialists in timing, kicks, punches, throws?

Together with Ju Jutsu, Aikido offers a rich teaching methodology for learning the principles of joint immobilization or conditioning. But it is not just a matter of technical contribution. Apart from the borderline cases – which also exist, which also require support made up of high skills in reacting to a physical attack, numerically the vast majority of people spend their entire lives being afraid of things that simply don’t happen. Or, that if they happen, they don’t threaten psychophysical integrity in a definitive way or they don’t happen according to the mental movie set as prejudice over time.

Aikido from our point of view could be a good ally for everyone to understand, through the techniques, the reasons that generate a conflict. It could lead to greater understanding about the use of force, making the line between self-preservation and abuse more clear. Ultimately, it could help create a more aware and therefore cohesive part of society. Not in the violent denial of reciprocal individuality but capable of relating thanks to them and to reciprocal interactions, even conflictual ones.

Perhaps thus, the goal of the “great victory over oneself” can be made available to everyone and not just to Budo-addicted.

Photo by Morgan Basham on Unsplash