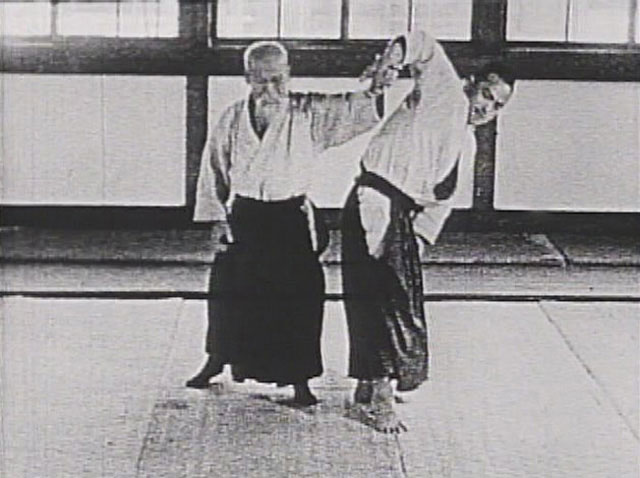 In 1974 Morihiro Saito Sensei published the third volume of Traditional Aikido Sword Stick and Body Arts. In the foreword to the book, he stated that he wrote “the words bequeathed by Founder Morihei Ueshiba which represent the heart of techniques”. Known as kuden, such short sentences may help the Aikido practitioners to better understand the purpose of the techniques and the way they should be executed. Moreover, kuden help everyone to remember the spirit that originated the didactic system in which every Aikidoka still trains today.

Nevertheless, as western practitioners, we are accustomed to a very conceptual approach to the study of the art. We want to understand everything, splitting every movement into small fractions, so that we can claim to have the control of every single step of the technique we’ll execute.

The third principle of Aikido, known as sankyo, refers to the capability to control the partner’s forearm by grabbing his hand so that the wrist starts rotating and overstretching, causing the compression of arms tendon and a sudden pain to the wrist, elbow, and shoulder.

The mechanic dynamics of sankyo have been thoroughly investigated and every school and style has its own didactics in order to make it understandable. Some researchers (Olsonfrank, Seitzfrank and Guldbrandsen) offered in 1994 a research paper titled “An anatomical analysis of Aikido’s third teaching: an investigation of Sankyo” in which the technique is accurately described in its effects on the human body.

Given that every Aikidoka sooner or later experiences sankyo and its impact on the body and on the whole system, we prefer to focus onto the aspects which underlie the kuden.

“Position yourself side by side with your partner”

Let’s see three reasons why it is important to properly understand sankyo:

Understanding which it may be, that’ the purpose of the practice.