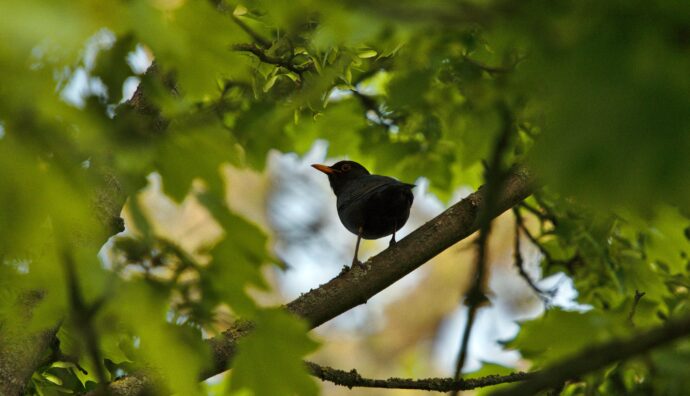 Yesterday night we were walking back home about at midnight (which is a very common time for those who are used to attend a class in a Dojo) when suddenly the whistle of a blackbird broke the silence.

A kind of unexpected, mesmerizing, modulated poem, that made us stop for some minutes on the dirty sidewalk of an anonymous street of a post industrial town of the Western “developed” world.

We were back from an Aikido class in which we tried to train our intention, making it clear to our mates through gestures that became smaller and smaller, yet real and tangible.

It came up to my mind the short collection of poems by the American author Wallace Stevens, “Thirteen Ways  of Looking at a Blackbird“, and this happened not just because we were staring at the silhouette of a singing blackbird nor because my family name means “blackbirds”.

We were there, a man and a woman, alone in the night. And a blackbird was singing for us. Just for us.

How many times we read, listen to and automatically repeat the sentence “we are one”?

But how much are we aware of the meaning of that?

Well, a humble yet fascinating whistle of a very common bird can teach many things.

That when blackbirds sing at nighttime, the Spring is coming and life restarts vigorously after the winter -regardless of the efforts or the indifference of humankind.

That poetry is everywhere, even at the corner of dirty streets in obscure and polluted towns.

That beauty, and so every genuine feeling, is given spontaneously and for free.

That the majesty of this spontaneous flow of grace is channeled through humble means that are very fragile and that demand our effort to preserve them.

That every single hardship and trouble we can live, there is something that overwhelms us and our discomforts with its beauty… If only we accept to blend with it.

As the blackbird started to sing, all my concerns about one of the hardest weeks I experienced in my job in the last years, disappeared. A single whistle woke me up to the real level of what is really important.

I don’t know if I ever truly experienced the concept of takemusu during the practice but for sure I believe that the principle of takemusu is loudly announced by the chant of a blackbird.