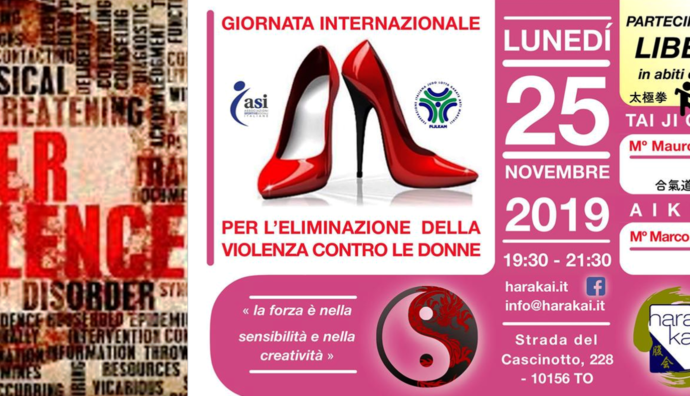 Almost every day, newspapers report a distressing list of stories of violence against women and children. It is not up to us to judge whether this continuous flow of news is offered by media with the aim of increasing sales or clicks and views by relying on angry sensationalism or whether there is indeed some reverberation of civil conscience even in the world of journalism.

The point is that gender-based violence and especially violence against women is a horrible problem of the society in which we live. Violence is always unjustifiable. If perpetrated on a vulnerable is a monstrous crime.

The size of the phenomenon is worrying. Italian Statistics National Institute provides a big picture of clear interpretation: over her life, almost one Italian woman in three was a victim of violence (psychophysical and / or sexual). The data, unfortunately, are in line with those monitored by the European Commission observatory.

Violence takes place predominantly in domestic environments and in family dynamics, which means that the episodes of violence to which the minors are present are increasing, and it’s quite easy to figure it out with which side effects.

In the face of this phenomenon there is also – and fortunately – a series of initiatives which try to counter the phenomenon that, like a cancer, lurks in the folds of ordinary days: from the workplace to sports, from cyberspace to school and so on.

In our own small way, we are members of the focus group in our Region who will try to shape guidelines for the use of technology in the home environment for the prevention of potentially dangerous situations.

From our point of view, we are witnessing an unfortunately inevitable gap between the world of laws and reality. Not only because the jurisprudence in some way pursues reality, trying to provide the society with tools to be able to regulate it within society. But above all because the flow of events requires the individual, especially the victim, to answer right here, right now.

Thus, alongside a continuous and progressive information campaign on the rights and actual possibilities available to victims to seek shelter and to restrain the violent, there is also a colorful sample of reactions to the phenomenon.

In the martial arts perspective, for example, there is a worrying and continuous proliferation of initiatives, courses and methodologies, aimed at conveying an undefined concept of personal defense.

In other words, and with greater clarity: proposing to anyone the idea that a course of some lessons is sufficient to transform him/her into the perfect warrior is intellectually incorrect and ethically reprehensible.

Moreover, from a social point of view, it is extremely dangerous. Because similar routes generally attract people in search of greater security. At the end of the course, they will be able to flaunt the image but not the substance and therefore, generally they will end up fatally in two possible directions. The victim will be even more victim, because the false security will vanish like snow in the sun, making him/her fall into a deeper abyss. Or the victim will become a kind of Terminator in turn, triggering a sort of pre-emptive war against those who will be judged as potentially dangerous. The data on sales of anti-aggression sprays is a confirmation.

In the recent past we have had the pleasure of actively collaborating in the project of the Palestra dei Diritti -Gym of Rights, a happy intuition of M.Fulvio Rossi who in recent years has worked hard to offer free training courses for women to take into account not only the perspective of the Global Self-Defense Method but of the psychological, legal and legal aspects connected to the phenomenon of violence, with a special care towards prevention and information of rights.

Our group has contributed to this initiative bringing the perspective of the CON3 methodology, namely Congedo Conscio del Conflitto “Conscious Disharge of Conflict”, developed by M.Marco Rubatto.

What we can offer, from people living in the Martial Arts, is a practice that increases awareness. Of our own movement, of our own thinking, of our own interaction among people, in stress.

Teaching / learning to break an arm is not complex: it can be done in one lesson. But is this really what we want? Solve problems in society by increasing them?

Or … Do we want to leverage fears to get so many “customers”?

What society do we want to live in and what are we willing to do to build it and preserve it?

On November 25, civil society is called to celebrate the International Day for the elimination of violence against women. Is it yet another empty institutional rhetoric, dictated by the need to wash one’s conscience in haste or is it really an opportunity to look at this phenomenon with different eyes?

The Dojo Hara Kai will organize a practice evening on the theme of Yin strength on November 25th. The Novum Experience course on Monday 25 training will also develop a thematic course on “female genius”.

Because what we can do is continue to be inert in the face of events or try to make our contribution because we can change. For the better.