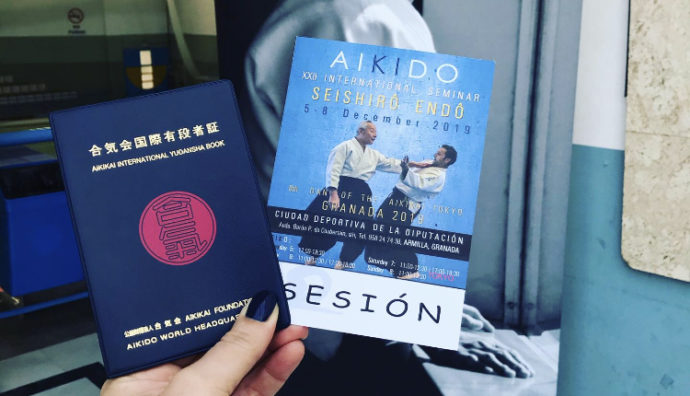 In the last month, we have participated in two seminars directed by Seishiro Endo Sensei, in Rome and in Granada.

We cyclically participate in these events for different reasons. The practice he offers develops many skills in managing time, distance, relaxation and extension, minimizing the use of force during all the practice.

Moreover, he is one of the left direct students of the founder of Aikido, Morihei Ueshiba and this has a kind of evocative charm, even if we are aware there are so many competent teachers who have seen, like us, O ‘Sensei only in pictures.

The seminars of this kind of level are an opportunity for personal growth also (probably: especially) for everything that is lived on the tatami and outside the mat.

You have the possibility to get involved in a different style. We are often forced to talk only through the practice, by means of our body, realizing how good or bad our movement is and how much is mature our Aikido. On a verbal level, the tatami is filled with languages ​​and idioms and if you want to build some kind of relationship, you must have the courage to trespass the cultural barrier, expressing yourself in a foreign language.

Moreover, when the sensei is world-renowned (at least in his own circle…), we can easily see a spectrum of attitudes towards him ranging from the filial dedication of his own deshi to the fear that can be caught in the eyes of white belts who try to understand something like everyone else.

In the middle, there is everything. From respect to veneration, from admiration to a kind of idolatry, from curiosity to that kind of resistance which derives from “yet my style is superior: I hold the truth!”.

When the number of participants is high, it happens, to catch surprises of opposite taste. From those who refuse to practice with you (this also happens sometimes) to those who, despite having been on the mat for 40 years, humbly put themselves at your service.

It also happened to us, due to the tiredness of the journey, to forget in the room belts and hakama and practice for a session with a white belt on. We were thus able to refresh the memory of when the whole world felt entitled to teach us like and better than sensei, stopping us every moment. The opposite also happened: the white color has increased the care and, with that, the quality of the exercise.

What about the practice and message of Endo Sensei?

Mainly that the tree is recognized by its fruits. We are lucky to attend some of his direct students and their Dojos. People who are technically very skilled, clear in their teaching methodology and able of forming healthy and welcoming groups. Capable of transmitting intensity to the work performed (Endo’s practice seems light but is very demanding for the musculoskeletal system) but never forgetting a clean smile.

We greatly appreciated the didactic indications, the constant questioning of the “why” of our choices, the continuous testing of our physical and emotional condition and that of our partner.

Endo Sensei is clearly an individual who has understood and integrated the principles and techniques into his movement. The perspectives that he allows to be glimpsed are the result of his research and his choice, both technical and of life.

It is amazing to see a person close to the eighty moving with such agility and speed. You can see in his movement a total mastery of sword techniques – and it is therefore a pity that Endo deliberately chose not to teach it: it would have been a more complete transmission.

It is not easy – and it can be seen as striking – to follow the proposal of a person who, after a life of forms (and of hard forms), proposes exercises that lead to the various techniques without clear forms. This “freeing from form”, focusing only on the connection with the partner’s ki, is a slippery terrain. It can be manipulative, even towards oneself. But you can taste the sense and, as Endo says, “it is the work of a lifetime”.

In other words, it is obvious that from his point of view, the 150 practitioners attending the seminar facing each other are more or less heavy and clumsy… It is almost a mantra: “I am teaching you everything, you are doing something else”.

Which is true. Maybe. Because either that “everything” is too high to be communicated and understood or it is nothing more than an understandable hyperbole. In both cases, the feeling is a bit like having ended up in one of those workshops where you are the rookie and the owner always finds something wrong with your execution of a job.

All these said, Seishiro Endo Sensei remains a very valid proposal that we consider as a useful and beneficial shock for all practitioners, especially for the most “technical” ones and we are grateful to those who, with a considerable organizational effort, manage and organize these events that we can benefit from.