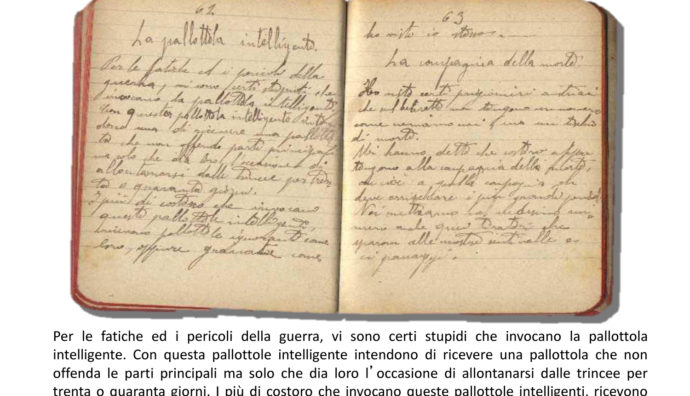 One hundred-four years ago, Francesco Olivero, an Italian soldier, wrote from the trenches in the middle of WWI

“Because of the labors and dangers of war, there are certain fools who invoke the smart bullet. With this smart bullet, they intend to receive a bullet that does not offend the main parts but only that gives them the opportunity to leave the trenches for thirty or forty days. Most of those who invoke these smart bullets receive ignorant bullets like them, or grenades, as I have seen”.

The ongoing emergency linked to the Covid-19 pandemic is treated at a communicative level with a lot of inexperience and so much emphasis that it often borders on war rhetoric.

So I thought that perhaps it was not entirely wrong to leave the word to those who lived the war, the real one, the one that takes you from home to go and die in the mud of a trench.

The letters from the front are a very interesting and very raw reading. Among the many, selected from the work of Federico Croci, from which the image is also extracted, the one cited contains a message that can also be useful to us, tatami walkers (sanitized with gel).

There is none of us who would not like to be “somewhere else”. An elsewhere made of job certainty, health, a sustainable future, the possibility of traveling freely and being able to organize meetings, trainings, parties, seminars, and so on.

Instead the reality is different and we know it. A huge social and economic crisis, which was crawling and which we tried as a society to deny, is getting stronger every day. Today is confused, tomorrow is uncertain. Our courses navigate in the midst of the shoals of regulations, the fear of students and teachers, the unavailability of facilities…

Who wouldn’t want a clearer scenario?

The veterans’ stories are always in agreement that the war sucks and that the first who succumbed were those who sought shortcuts, taking refuge in imaginary worlds or trying to be injured to be sent back to the rear. Or at home.

Except that in war there is no rear or home. And so there is no shortcut, there is no smart bullet that leaves the problem to others, removing it from you.

We have been training every day for years, even during the lockdown. For what? To look for our smart bullet and have a grenade exploding on us in return?

Often it is debated whether the practice of a discipline, even more a “martial” one (whatever value is given to this attribute), should vivify ordinary life, that which takes place outside of the place and time of training.

The “intelligent bullet”, made up of Public Bodies that asymmetrically and asynchronously allow some to train, others not, and then close again in a paroxysmal and confused alternation of indications, can conceal a more serious risk. The haste, the anxiety to leave again can conceal the inversion of the cause with the effect. Training a lot to just for training is never a good justification, nor does it build anything good, apart from some sculpted abs (for those who make them).

Ignoring the grenade of the question of meaning, that’s the danger. We are perhaps all capable of “resisting in time”. But if the place and time of our training were only the few hours a day that we dedicate to practice, then what would be the rest of the day? Just a gap to be filled waiting for the next workout?

And if it had been denied us much longer, which smart bullets would we be tempted to accept?

In the “conflict” -because that’s what we’re experiencing, certainly not a war- the shortcut and the escape are the quickest way to self-destruction. What is the use of dedicating every day to the search for the ability to live a physical conflict, if we are not able to accept the real possibility of living strongly impacted by what surrounds us?