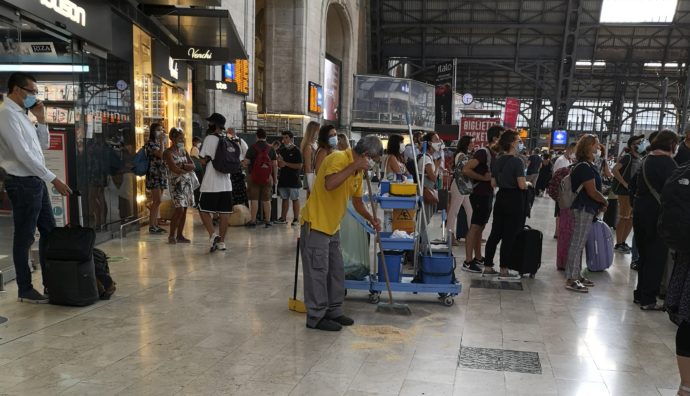 Milan, Central Station. A hot afternoon in this strange August. Trains that depart and arrive and, in the atrium, a bustle of many travelers who invariably stop in front of the large board to check timetables.

It happens that, not far from us, a small dog begins to have a bout of diarrhea. Its owner, in total panic, tries to dab with all the handkerchiefs he has at his disposal. Then, driven by embarrassment and panic, he takes the dog in his arms and disappears into the crowd.

The floor, covering an area of ​​at least 6 square meters, is a mosaic of excrement and dirty handkerchiefs.

Why telling this unpleasant story? Because it is what happened next that’s even more incredible. On the degree of civilization of many animal owners, on the related capability to behave in public by imposing scenes of this kind on others and on how good it is for pet to be scrambled here and there, everyone can get the idea they want.

The point is that for a good half an hour, until the accidental arrival of a cleaner, a river of people, strictly wearing a mask, quietly trampled on that nice mush. Someone staring into space looking for a platform, some other trying to orient themselves in a chaotic space. Someone else still, just resting and waiting for information, stopping right above, with all their shoes and suitcases.

I counted three people capable of realizing that they would step on the dirt, avoiding it. And five others who found out when it was too late.

Then, in fact, from the swaying tide of people, a janitor appeared and silently – but with a face that was clearer than a whole speech – proceeded to clean the whole area.

The indifference of the crowd first of all created a bubble around the janitor: in some way his figure made visible a dirty situation, from which the human being automatically moves away.

Then, at the end of his task, the tide of indifference once again leveled the flows and spaces of the atrium.

The more we look at our behavior, as individuals and as a society, the more so many thoughts and considerations arise in our mind. We could make moralizing annoying moanings: we never liked them and more and more we realize that they are useless.

Of course it is a bit difficult to think that we are capable of acting some kind of responsibility if we are not even aware that we end up with both feet in… canine slime first – and in such an overwhelming percentage quantity.

It is not just a matter of hygiene and contradiction: anti-everything masks worn and suitcases placed on the ground on any sewage.

It is obviously something more deep.

And it’s true: there are many other problems and fortunately the world goes on because there is a backbone in sociewty made by people capable of recognizing clean from dirty, in all fields.

But it is also a bit useless and naive to think that we can cooperate to solve problems bigger than us, change the world, if we don’t even know how to walk.

(Almost) midsummer thoughts just to say that we all have a huge need of time and space to learn slowly, at homeopathic and ever increasing doses, to consciously inhabit our life.

To say that newsletters, forecasts, newspapers and words may perhaps lie but eyes don’t. And in that bustle,  you could meet lost glances,  looking for somewhere trying to get back a lost normality and that clash so much with happiness that people try to get out of their mouth.

To say that perhaps we are all a little bit like that small dog, alone in the face of indifference, with no other tools to solve our annoyances and problems than not holding them back and spreading them out to the world.

To say, therefore, that even if it won’t be easy, we will still be here, in September, walking together, on that difficult path of the search for harmony. Falling and getting up to learn to see where we walk and why.