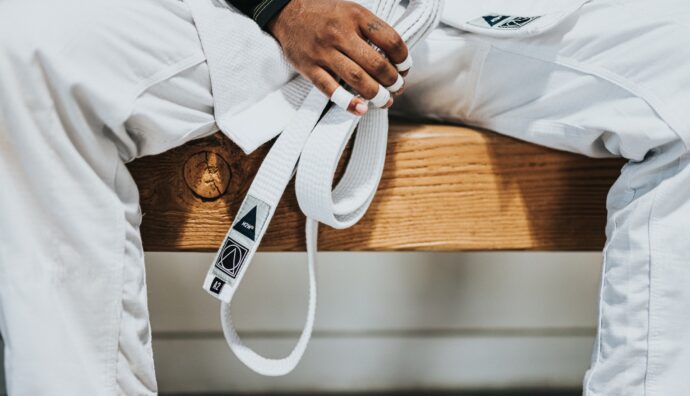 – Hey, what kind of belt do you have?

– In Okinawa, belt mean no need rope to hold up pants

Since October 2020 – that is, when activities as Martial Arts’ training were suspended in Dojos and gyms – my black belt and the hakama have been put there. Washed, ironed and stored neatly folded in the bag I use for training. Waiting.

As we wrote on other occasions, our community immediately organized on-line sessions to keep alive the sense of keiko, a certain continuity of practice and technical study.

I’m not a keikogi and hakama fanatic: I feel much more comfortable in a suit with a t-shirt on. However, I do acknowledge some qualities in these clothes. They help to get in a cultural dimension, demarcating a border between the rest of the day and the keiko in an oriental mood.

They facilitate learning the geometries of the techniques (the lines of some cuts follow the shape of the gi; some grabs are possible just with these dresses).

They help the individual to feel as a part of a group and the group to convey a necessary concept of equality and shared dignity. The hakama also facilitates correct posture, makes moving quicker in the suwari position, allows better dispersion of the impact on the mat… Even if it transforms the legs into a greenhouse.

In online training, I considered important to keep the habit of wearing the keikogi, yet tied up by my old white belt. I am not a martial artist with fifty years of experience: mine is a small gesture and my reasons may perhaps be a starting point for others.

The first reason is: not loosing the habit of discomfort. In recent months I noticed that remote working (which is also a blessing, if compared to many less happy ones) has become something that, if not well contained, takes over. The number of hours worked increases, productivity increases and you risk not managing time well. But there is a more subtle risk: if you stay in your little nutshell with strong virtual polarization, everything that is an exception, everything that requires a change in habits, tends to be fought and erased.

Therefore the schedule for a training with your companions is welcome – although on Zoom – and blessed are this uncomfortable trousers with and this oriental pizza chef’s jacket held up by a cotton belt that squeezes the belly.

Practicing a martial discipline in a suit is certainly more comfortable but the body would move in a different way. And when ordinary practice will be back, the body will have to be accustomed to the sensations that the dress gives back to the body during movement.

The second reason is: in every change there are fixed points. A hundred years ago Aikido did not exist, in a hundred years, assuming that the term still exists, Aikido will be something very different from what it was and what it is (or what we think it is). At the same time, there will forever be on the one hand the human being with his inner universe and his desire for improvement, on the other hand a plethora of more or less useful tools, one of which is Martial Art, for such improvement. The fixed point of my change – hopefully for the better – is the personal commitment keiko after keiko. That fixed point, in this vortex, is represented – also – by dressing as if I were at the Dojo. Because in truth, the Dojo is wherever the path we have chosen is practiced.

On the contrary: it is the sacredness of our homes that is further acknowledged by our commitment to live it also as a place of practice. It is that sacredness that, brought to the Dojo, allows the Dojo to be a place of growth, for me and for others.

Somehow, we are forced to bring Aikido into our lives, into our homes. It is as if life forced everyone to understand what are the sources that quench the thirst of existences. If we wait for the usability of a place – the Dojo – to determine the chance of drinking, we risk waiting a long time.

The third reason is linked to the white belt. No false modesty. We are experiencing a huge evolutionary step in our society. We are trying to interpret this evolutionary step as we are able to decrypt it. Practice at home is an absolute novelty. As well as the forms, the modalities. So are the principles and perspectives, because the context of a corridor is absolutely different from that of a tatami room.

So I chose to live this not as a period of suspension but as a new beginning, a new chapter of my journey.

I have always argued that being a black belt is actually a sign of a new apprenticeship. In other layers, this always applies: one becomes a father and then perceives a different dimension of being son; you advance in career and you see the new hires with another perspective; you get married and understand your parents with increased depth.

I don’t know if the comfortable habit of the Dojo would have opened my eyes so much and so quickly, in these months, to my limits, clearly indicating the direction.

There is a word in our Western tradition: κένωσις – kenosis. It represents the “emptying”, more precisely the encounter between the divine and the human (in the Christian tradition, God’s choice to encounter man in the incarnation of Jesus).

The emptying we have experienced and are experiencing is something deeper than a mere white or black belt put on.

So the question I ask myself is: what had I filled my life and my symbols with? What will I fill them with from now on?

Is it obvious that I will dress myself with the signs of my rank. But will I fill them with arrogance, because basically they demarcate a hierarchy or will they be a tool for service?

We manage ourselves in the meantime to keep the organizational machine switched on to a minimum. Some are planning grade tests, others aren’t, others disappeared.

But…to a shoshinsha (初心者), an absolute beginner, what does it take to practice?

Otherwise the real risk is that habits and structures, roles and hierarchies, degrees and qualifications are kept in place, because we are not able to understand how both the discipline and society evolve – and we will suffocate, not for Covid-19 but for the inability of associations to speak to people.

Sure we could always claim that Master Magi was talking about Karate and not Aikido or Martial Arts.