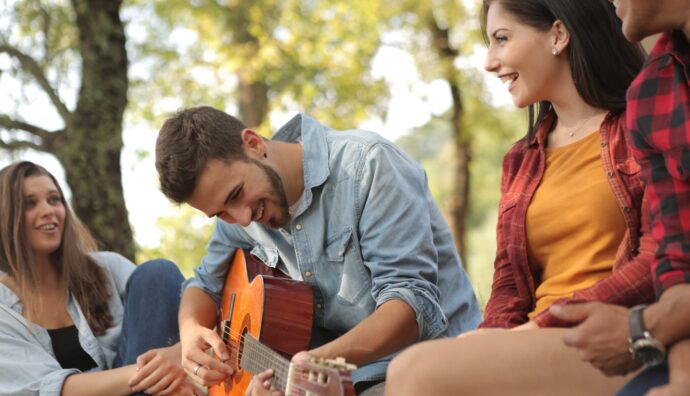 The cycle of interventions provided by different specialists continues, investigating the best behavioral mix in order to restart activities, fully living the return back to (new) normal conditions of socialization. Music contributes in a powerful way to our psychophysical wellbeing and creates conditions for non-verbal communication between people. The following is a reflection of Silvia Volpato. Ph.D. in Agro-food sciences, technologies and biotechnologies, is involved in research and development in the microbiological field. In parallel she is committed in a musical artistic path, studying piano and lyric at the Conservatorio Giuseppe Verdi in Turin and subsequently music therapy at the APIM School of Music Therapy in Turin. Silvia is part of an integrated dance-theater company and she practices Aikido at the Hara Kai Dojo, where the practice is usually performed with the background of selected playlists.

The health emergency caused by the Covid-19 pandemic generated restrictive measures that affected many sectors, including martial arts and, of course, Aikido practice.

Many Dojos and associations had to stop their activities, while others continued to practice trying to overcome the hurdles due to social distancing and the use of personal protective equipment, implementing new ways such as the use of online platforms and finding alternative places of practice such as city parks.

There are still many unknowns related to operations; among those who debate whether it is possible to speak of Aikido also for interventions that are carried out remotely, many believe that an attitude of research and experimentation is the most fruitful way to contend with the present.

Despite the criticality of the situation, perhaps, quarantine can be considered as an opportunity and not just as a limit.

Aware of that foundation of relationship with the other and with oneself that is crucial to Aikido practice, how can the combination of isolation and connection find a balance? Can the sound-musical element, a universally shared language and, very often, used as a substrate for different life situations, help fill the imposed isolation and create a new “contact” with oneself and others?

First of all, it is interesting to note that music, like Aikido, is considered “art” and it is now recognized that art is able to develop imagination and creativity through the enhancement of lateral thinking and the critical spirit, to educate passions and the heart by promoting a balanced growth of the emotional dimension, to develop a sensitive and intuitive relationship with reality, developing those life skills considered fundamental in decision-making, relational and cooperative processes and in subjective health promotion behaviors (Rossi Ghiglione A., 2014) described by the World Health Organization in the Ottawa Charter (WHO, 1986). Art is not to be considered a medicine, but it can still nourish the spirit, motivate us to improve, grow and heal and, in some cases, cause physiological changes in the body.

For many years now, the number of initiatives and experimental projects in various areas of medicine and health has grown, from the clinic to health promotion; from health education up to the training of professionals. Even in the literature, studies witness the existence of a more frequent relationship between Arts, Humanities and the Healthcare Sector and describe, evaluating their effectiveness with qualitative and quantitative tools, the positive influence of the Arts on Health. (Rossi Ghiglione A., 2015).

So let’s see how music can help to get in touch with oneself and with others by creating a condition of wellbeing.

Music can be described as a form of emotional communication (Juslin P.N., 1997) as it allows you to evoke and communicate complex emotions without the use of language. This potential makes it an important tool for studying the neural connections of emotions (Daly I. et al., 2019), which is why neuroscience put enormous interest in this field in recent years. In particular, neuroscientists and psychologists have invested a lot of resources to understand why humans listen to music and how it can affect brain activity (Salimpoor V.N. et al., 2011). The literature is full of works that investigate the relationship between music and emotions from countless points of view.

Scientific evidence supports the close relationship that exists between music and emotions. Lab tests and medical imaging confirm that our brain respond to the reception of music in an unambiguous yet complex way.

Functional neuroimaging analysis have shown that music is able to induce changes in the activity of all these brain areas (Koelsch S., 2014; Brattico E. et al., 2016). Contrary to what has been theorized in the past, the auditory cortex does not perform exclusively perceptual functions. In fact, it is variously connected to the areas belonging to the “quartet of human emotions” and, consequently, involved in the induction and modulation of the emotional processes connected to listening to music (for instance joy, fear Koelsch S. et al., 2018).

The discovery of structures and neural systems specifically dedicated to the processing of emotions, the activity of which is directly and widely influenced by music, opens up new perspectives on the use of music as a tool to analyze the nature and genesis of emotions and gives us new awareness of the evolutionary-functional nature of music itself. The presence of connections between the auditory cortex and the anterior hippocampus, involved in emotional processing linked to attachment processes (Koelsch S., and Skouras S., 2014), confirms how music can be a powerful facilitator of human relationships (Tarr B. et al., 2014), making it at the same time a useful tool to investigate all those emotions connected to the relational dimension.

These considerations bring us back to Aikido and the questions we started from. The answers to these questions are actually simpler than they may seem, and are provided by the neurosciences themselves: music, by its nature, is able to act, among others, on the neural circuits responsible for the development of behaviors that favor socialization and aggregation. So, although in different ways, both music and Aikido play an important role in personal well-being and in the relationship with others and with ourselves.

The creation of a flexible communicative space with one’s own environment, the ability to distinguish between the internal and external world and the ability to modulate and regulate one’s emotions are strictly interconnected factors and produce transformations that characterize the emotional and cognitive growth of each person (R. Caterina, 2005).