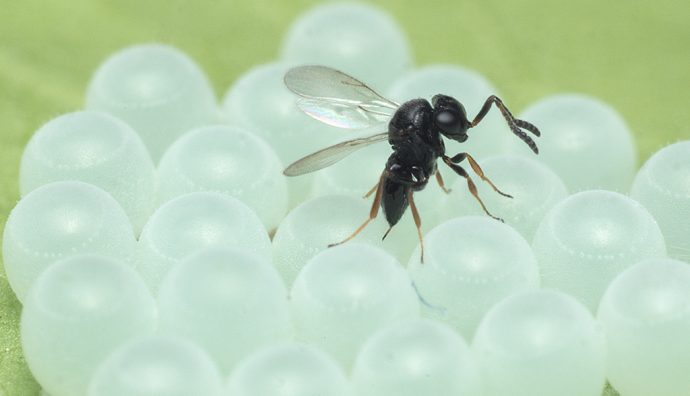 Do you know the “samurai wasp“? No? It is a small insect that we will soon get to know, because it will be introduced into our fields in order to try to counter the spread of the brown marmorated stink bug.

In fact, among the gifts of globalization there is also the spread on a global scale of species that find fertile ground to reproduce even in our latitudes. The case of the Asian marmorated bug is emblematic, which came to Europe around 2007 through Swiss logistics hubs and crushed the agrifood sector, destroying about 40% of entire crops.

Thus, while researchers try to identify safe methods to chemically counteract the proliferation of this species, they also try to contain the spread of the bug by introducing another antagonist insect which, by parasitizing the eggs, should tend to reduce the population. The samurai wasp, in fact.

These are serious issues, of which little is said yet they concern everyone, because the production of food is of primary interest. Yet little is being done, and less and less, to carry out surveillance and containment of species that, outside their original habitat, upset entire ecosystems. It applies to everything that is alive: mammals, reptiles, insects, plants, fishes.

How do these issues impact a Martial Arts practitioner? Certainly not due to the fact that the “samurai wasp” is used…

Rather, while yesterday I was searching our plants exterminating the bugs that I could catch, I reflected on the enormous distance that there is -on average- between our lives and a kind of “natural order of things”.
While some of us may be lucky enough to own a vegetable garden, we usually get everything we need thanks to a swipe of a credit card, without the need to get our hands dirty.

So we gradually forget that the earth does produce fruit, provided however that this fruit is defended and freed from parasites and that it is protected from the hunger of other species.

And the earth, the “Mother Earth”, is a generous mother, but she allows also other plants to grow. So if the field is not constantly cleared of grasses, for instance, in a short time the field becomes uncultivable.

We are fascinated by the call to a life more in contact with nature. And it’s a good thing, because it means that we still have some sensitivity and respect for our roots. In our practice we often talk about the “naturalness” of the gesture, of the movement.
A prominent environmental awareness is often rooted in our communities of practice, a tendency towards eco-sustainable and “bio” lifestyles, a widespread rejection of hunting…

At the same time, we try not to forget that a Martial Art is also to be intended as an instrument of acceptance and coexistence of both life and death. When you start this kind of reflection you usually perceive yourself as a real samurai (not the wasp, the warrior). Then you go back home and arrange a dinner by opening a package bought at the supermarket, heating water which arrives purified by opening a tap, on a fire obtained from the combustion of a fossil gas that has traveled thousands of kilometers, generally from highly militarized areas.

The “com-petition”, the insistence on the very same resource by multiple subjects who want it for themselves, thus becomes something obscure, or is completely removed from our perception.
As a farmer, the legal framework in which you operate ask you numerous interventions to fight parasites, fungi. All this stuff is mandatory or highly recommended during the production cycle of a plant.

In fact, in order to get something to eat, we uproot, modify and kill, all the time.
For the consumption of other living forms, the concept is much more clear: it is evident that if our grandparents or great-grandparents were able to pull the neck of a hen, to slaughter a pig or a calf, certainly we do not need to hear the snap of the neck of a chicken in our hands to eat tasty wings in barbecue sauce.

So we are martial artists who train, sometimes as obsessed, who are sometimes unable to slap a mosquito or who are hesitant to kill a bug.

Of course: it is an excellent thing not to get our hands dirty, not to cultivate a bloodthirsty spirit. It is not necessary to know how to slaughter a lamb to be a ninth dan.

However, we should sometimes remind ourselves that we, at least we who live in this time and these lands, live as if in a bubble that risks making us lose connection with reality. And the reality is that natural laws are magnificent and perfect but are marked by a continuous real struggle for survival. A continuous “all against all” well disguised by the gentle appearance of a bird’s song, the features of a mammal, the fluid movement of a group of fishes.

The truth is that we socially sublimate in equally well disguised forms of ferocity having the weakest as our target.

The totality with which an animal struggles in search of food, fleeing from the predator, looking for a partner to ensure the continuity of the species, is the result of a binary choice: to be or not to be. Shakespeare was an excellent observer of reality.

The conditions in which four fifths of humanity live are no different.

Yet we, our stomach full of hamburgers, may dare to ignore this reality. In fact we, as society, are collapsing in the face of the evidence brought to the fore by a small virus: “yet we die”!

Martial Arts are welcome as they can remind us that the body can move more freely than it is used to. They remind us that it is better to get out of the line of attack in case of a fight.

But ultimately they must remind us that the human being can choose to transform the inevitable competition in which he/she is immersed in cooperation so that everyone can prosper.
This is the “unicum” that distinguishes man from the rest of the order of things. Humankind can, without withdrawing from daily work to carve out his own space in the world, make this struggle evolve into something broader and less compulsive. This is the message of a “do”: not an unreal irenism yet the sharing of the competitive spirit of living.

Disclaimer: the author of original picture Samurai wasp above displayed is the Oregon State University, all rights reserved. The picture is licensed under the Creative Commons Attribution-Share Alike 2.0 Generic license.