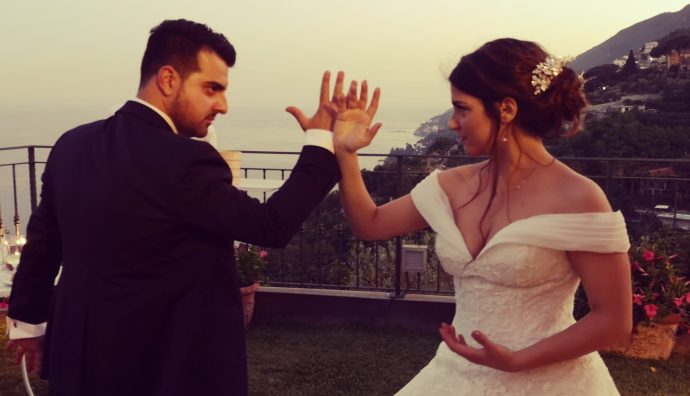 Being invited to a wedding is always a wonderful chance. The beginning of a new family is celebrated, as a dream makes true. The -literally- creative power of love is celebrated .

And if is a friends’ wedding -friends that we are lucky to walk with on the path of Aikido practice, then it is also a wonderful opportunity to do some reflection .

Each of us has his/her own personal history, which biologically originates from the union of those who brought us into the world and which is made up of the relationships we experienced. We are the result of those who fed, listened to, cared for, educated us. We are also the result of accidents that occurred in relationships: it’s not always fun and games.

At a certain point a desire arises, a kind of curiosity, a sort of instinct that we could compare to the stimulus that the young swallow feels when it takes its first flight. There is a mix of emotions and willpower, perhaps not well defined, which leads us outside what is known. We are looking for someone to look in the same direction with.

A marriage is not such a difficult thing: it is the foundation of the history of humanity. Yet it is wonderfully complex. It represents a condition in which the full presence of two individuals builds a new, non-dual reality. No longer the sum of two people yet not even the dissolution of two individuals.

We live in a “liquid” society, with precarious employment situations and induced -and gradually accepted- unsustainable lifestyles that persuade us in a slippery way that the choice to get married depends exclusively on economic conditions. Which is partly true.

On a dialectical level there will always be excellent reasons both to get married and to remain within less official bindings.

Yet life doesn’t give a…buck about dialectics and focuses on substance.

Which also includes establishing a bond between two people formalizing it in front of society.

Our simple life of martial practice speaks of the same human nature.

We don’t experience any kind of progress without relationships. We understand very few unless a constant work of discovering our identity, which allows us to accept and understand the other as well.

In particular, Aikido is a practice of rigorous understanding of oneself and of the other which sublimates in overcoming non-duality when the action is perfected.

And in practice there are times when fear blocks us. But it is only by accepting to literally take a leap into the void that a projection becomes a tool that opens up boundless horizons of growth.

Just as it is only taking responsibility for being evaluated during a test that allows us to review who we are from ever new perspectives: a yudansha and a person with a month’s experience are nothing more than two people with different understanding degree of the same situation.

For this reason, a practice of self-cultivation such as Aikido (like any discipline), is a powerful tool for growing the couple relationship, because it is based on the same founding pillars.
In fact, there’s more. If it is true that fortunately one cannot live all twenty-four hours one next to the other and that it is essential to reserve space for oneself in order to recharge and recover, it is even more true that a couple who decides to practice a discipline together, finds itself totally naked.

Which is good, especially during a honeymoon. But it’s a nakedness that shows us those things that we don’t even know and that maybe we wouldn’t want to share so much, least of all with the person with whom we want to be always in our best version.

And it is by accepting who we are that we can truly grow and love, realizing or, finally, finding “that small measure of peace that we all seek, and few of us ever find”. (Which is a quote of “Last Samurai” movie which is a very romantic one)