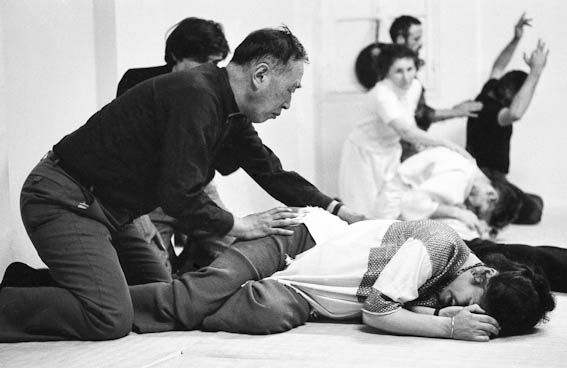 Recently in the Dojo we dedicated a training session to the principles of the “katsugen undo” (活元運動), the “regenerating movement” as diffused by Itsuo Tsuda, who learned such principles from a Japanese medical doctor, Haruchika Noguchi and was for about ten years one of Morihei Ueshiba’s students before leaving to France, where he graduated at the Sorbonne University and started to teach Aikido founding the “School of breathing”.

It’s not every day exploring other styles and schools. In the case of Itsuo Tsuda’s work and legacy, it is worth trying to go deeper in the meaning of the two pillars of his teachers (Noguchi and Ueshiba): the search for a natural, regenerating movement in order to achieve a not conditioned posture, a natural, healthy and neutral physical and mental condition, known as seitai (青苔) .

It is interesting quoting some parts from one of his books, The unsteady triangle:

Coming to life “seitai“, living “seitai” and dying “seitai“. […]
Such a simple thing should be understood quickly and put into practice by everyone.
In fact, this doesn’t happen as easily as you think.

When you see people who have been practicing for years, you are tempted to believe that they understood at least something. This is not always the case, because subsequent events show that they are not always independent and free. At the slightest shock, they can be shaken from top to bottom. They do not free themselves from the old clichés that keep them tied up tightly.

I have absolutely no intention of rejecting civilization. On the contrary, I accept it. To convince me of its advantages will be enough an electricity break of a few hours, with the subsequent inconveniences, the new habits to be taken, etc.
Yet the civilized ones continue to dream of the return to the state of nature: the holidays, getting tanned on the beach, the naturism, life in the community, traveling to distant lands to escape civilization; the idea to return to the past, to childhood or to previous life, according to the reincarnation theory in vogue for years.
Why has something as simple as living become so complicated for the civilized ones?
Answering this question is not as easy as imagining it first. The impulsive reaction of  a “tabula rasa” of all that has been accumulated in the past is not a good answer, because, sooner or later, we will be forced to collect the pieces of the broken pot and to stick them together again.

Trying to summarize all that has been taught by Itsuo Tsuda is impossible. And this post is just a small contribution to honor the huge activity of this sensei who devoted his life in spreading Aikido and its higher principles.

For sure, he strongly believed that the practice of a martial art, especially Aikido, was just a tool to achieve a higher level of awareness, which is something slightly different from wellness.

His achievements and his inspirations are impressive. In his school, every session has its core in the “yuki” practice, a gentle touch that, by connecting the practice’s partners, facilitates and allows a kind of “awakening” of our inner self.

By reading his books, you can easily discover that Tsuda’s experients roots in a solid ground of practice -and those pages are precious evidence of the kind of training proposed by Morihei Ueshiba to his students -and its purpose.

Nevertheless, this man, who achieved excellent goals, both in the study of martial arts and in the academic cursus honorum, did not write a single word about effectiveness, self-defense, subduing an enemy,…

Why? Did he reject all his past? For sure he has not been locked by the past, rather using it to develop something that could be used to fully live his life, helping others to do the same.

That is, in the end, what really matters.

**Disclaimer** The picture portraying Itsuo Tsuda while applying “yuki” is a copyright by Eva Rodgold.
The quoted book “The unsteady triangle” -“Il triangolo instabile” is published by Luni Editrice.