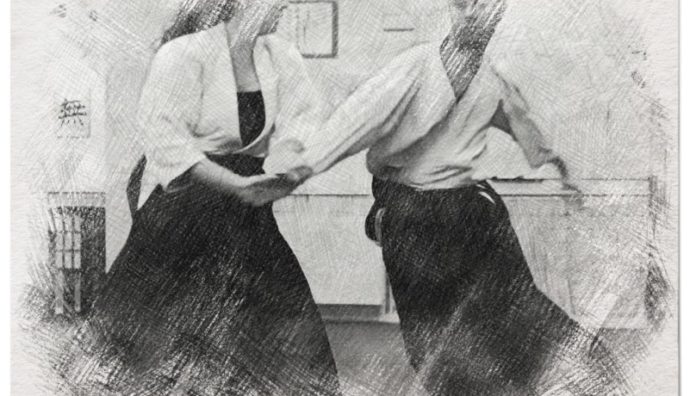 The Holy Grail of Martial Arts is, with no doubt, the achievement of the condition in which  techniques flow spontaneously. Easy, nice, clean, almost effortless, effective. Beautiful.

This condition, in Aikido, is known as Takemusu Aiki, where Aikido that flows spontaneously and freely.

For those who grew up watching Hokuto no Ken mangas, it’s a bit like talking about “Musou Tensei”. The teenager dream of each of us.

Is there a methodology that can be taught or at least a process of facilitation that allows the practitioner to experience, if not Takemusu Aiki, at least the conditions that may favor its manifestation?

The answer is yes. In our Dojo, where we train, we often walk on practice paths that lead to this experience. The teaching method is quite simple, which, as always, does not mean that it is easy or easy to be implemented.

In fact, we start from the obvious consideration that we are all able to apply a technique in a devastating way. Devastating for the physical structure, the balance and sensitivity of the victim. It is therefore initially a matter of experiencing a condition in which there is only not so much the waza as the jutsu, the application of the pure techninque.

We then step on the next level which requires to increase the sensitivity: repeating the same movements leads us to feel where and when we begin to affect the physical balance of our  partner. You can perceive that subtle edge that separates coming into contact with the center of our mate from prevailing over him.

The third level of experience, unlike the first two, requires that the technique takes place in motion. Taking the center-line and the balance of one’s partner means accepting to lose one’s own.

Thus it begins a movement that ends the attacker/attacked duality. This movement has some features:

This kind of practice therefore is useful to learn to recognize the qualities of Takemusu Aiki. Similarly, it leads to recognize some characteristics of the typically martial way of self-dwelling one’s experiences and abilities.

This teaching, for example, requires a serious reflection on the concepts of will and finalization.

The will indicates, also etymologically, a process of choice, while the finalization places a division between a before and an after.

In some ways, the experience of a more spontaneous flow of techniques requires a change of perspective and a will restored to its original purity, to its initial ability to guide choices.

Willing to finalize a technique can be useful for learning the main lines of a form. But in fact it implies a fragmented choice or a choice of division.

It is a matter of restructuring the perspective, keeping active the choice (the will) of wanting to stay inside the process. Which is basically the only option that honors the choice of going to the Dojo at the end of the day. Accepting the possibility of failing as well of being surprised.

In both cases: training exclusively for the finalization is fundamental, however it risks being partial and certainly avoids the practitioner to ask himself some uneasy why.