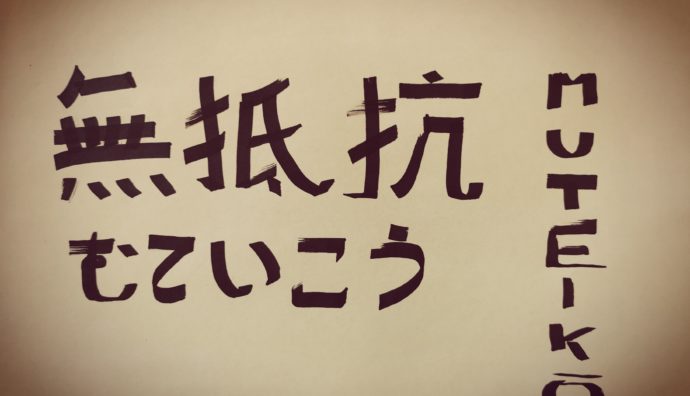 Aspiring sincerely to an international peace based on justice and order, the Japanese
people forever renounce war as a sovereign right of the nation and the threat or use of force as
means of settling international disputes.
In order to accomplish the aim of the preceding paragraph, land, sea, and air forces, as well
as other war potential, will never be maintained. The right of belligerency of the state will not
be recognized.

Article 9 of the Japanese Constitution is a non common point in the state constitutions’history, with its renunciation, formally expressed, of the establishment and maintenance of armed forces. As often happens to the constitutions of this or that country, even the Japanese one  has not even seen the light… And recent decisions of the Japanese government are putting the word “end” to an unfulfilled pacifism.

In all martial arts the concept of muteiko (無 抵抗) is transversal, and it can be translated as “non-resistance”.

But what is this “non-resistance”? We could begin to say what it is not.

It is certainly not synonymous with total passivity or total stiffening when facing an external force that comes to “attack”.

It is certainly not synonymous with “non-violence”. It may be a component of it, but the choice not to use force excessively (such is the meaning of violence) is other than resistance. Trying to make it simpler: Gandhi’s non-violence was pure resistance against the abuses of colonialism.

Nor is it synonymous with the fact that martialists automatically become pacifists by the simple fact that they enroll in a course in Aikido, Judo, Karate …

Indeed, to be honest: to think that budo, the expression of four centuries of civil wars in Japan, is a manifestation of pacifism probably means not to frame Japanese history or its prospects at all.

mu, 無, nothing, nothing

teiko, 抵抗, resistance, in which kanji 抵 is interesting, where a striking hand is represented within a clan. (What an amazing imagination!)

It is true that the graphic etymology, in the case of ideograms, does not always allow us to understand their arcane nature… However, if here in the West we think of resistance, we can think of a physical phenomenon or we can think of WWII tales.

Conceiving a hand that starts hitting, fighting, within a clan is a much clearer choice of meaning.

The negation of that , then becomes “non-resistance”.

Non-resistance as a refusal of any form of sinister herd behavior (and not for this reason as legitimacy to become, on all and always, some kinde of “Contrary Maries”). Self-imposed pacifism as a facade is one of the worst conflict incubators.

Non-resistance as a refusal of any temptation to convey everything in an easy fight (verbal, relational, physical), debasing ourselves and the other through a comparison based on external (strength) and non-internal (presence) factors.

Non-resistance as a refusal, above all, to consider ourselves victims, prisoners, of third-party situations and decisions: when you are lucky enough to practice with expert practitioners, grasping their wrists and arms is similar to grasping the air, inconsistent and really “non- resistant”.

The muteiko therefore becomes, in times of crisis, an additional ally to be able to read themselves and others and thus have the necessary elements to build with a positive act that peace that we all seek and that only some find.