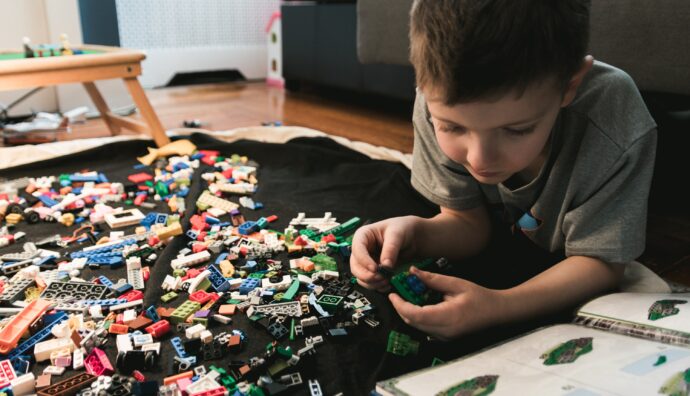 Like so many other children of my age, I grew up living and breathing LEGO bricks. Looking back on those afternoons, made of sounds of plastic bricks that fell on the ground, matching to build shapes and structures, the deepest part of me removes the distance of time and introduces sounds, emotions, serenity.

Settled somewhere inside me, the me-child thinks of those constructions as beautiful and ingenious.

Recently, the picture of a police car arrived to me casually before my eyes. It was 1983 and my father, who was a very lovely person but not inclined to confuse affection with the continuous purchase of

toys, for no reason picked me on a Saturday afternoon to a shop where he made me “choose” this little box.

The joy for me, child, was double: a LEGO without an apparent official motivation. It was more or less on these days of Spring:

there was no Christmas, Easter, name day or school results to justify such a gift. I understood long after that love is in small things and cannot have explanations.
In short, as you can see in the photo, the car, in the eyes of an adult, has really simple and graceless lines, it is made up of very few elements, compared to a traditional model car it has wheels that mayturn, but do not make it “run “to inevitably crash into a baseboard, a shoe, a furniture.

Yet for a child’s eyes it was everything. It was all.

When you have the grace to be able to watch a child’s game and his/her activities, you notice one of the characteristics with which we have been wired since birth: our innate curiosity.

When we are small, everything is brand new and everything is worthy of our attention. A spider that weaves the web, a 4×2 brick that fits over two columns of bricks, a leaf eaten by a caterpillar, the antenna of a snail, the flash of light when it is switched on of a switch, the shape of grandfather’s shoes…

There is no apparent criterion in the child’s observations that rules. Not even a hierarchical order.

This is the reason why a piece of wood, in the hand of a child, has always become a toy, from time immemorial. It is the spark that has transformed, for generations of children, squared bricks into supersonic planes, houses, cars, animals, characters.

When his curiosity merges with his total presence in what he observes, it can be said that in the child the shining light of an act of creation reverberates. And this is the reason why twenty miserably molded plastic elements become the most beautiful police car ever.

Because it carries within itself all that the child is. Full presence, or mindfulness, if we want to say so.

Then he grows, the world becomes fast because observation, as a gateway to the world, gives way to ideas, conceptualizations and… “My” police car becomes “a” police car, curiosity becomes intellectualized, the creative ability turns into creativity aimed and functional to partial objectives.

A life discipline, like Aikido among others, can be defined as “The Path of Spoliation”. Repetitions, techniques, principles are tools which foster the child we have all been, with new attention.

By “putting” technique and seeking stylistic cleanliness, we have to “remove” meaningless layers of conceptualizations, to return to being inhabitants of our present. We do not believe in a discipline which, in the name of greater curiosity and creativity, refuses to acknowledge the “toolbox” of techniques and the didactic methodology that makes that tools useful for growth.

We don’t even believe the other way round: on the contrary, the sterility of technicality in itself  is producing in this period of forced pause, the obvious result of the falling out of love of several “tatami animals”.

It is a matter of recovering the gaze that we all had and that only a few have kept, that gaze that Jesus recapped this way  “If you do not become as little children, you shall not enter into the kingdom of heaven”.

Whatever our beliefs and creed are, whatever our story may be, that child is there somewhere and knows what we are talking about.