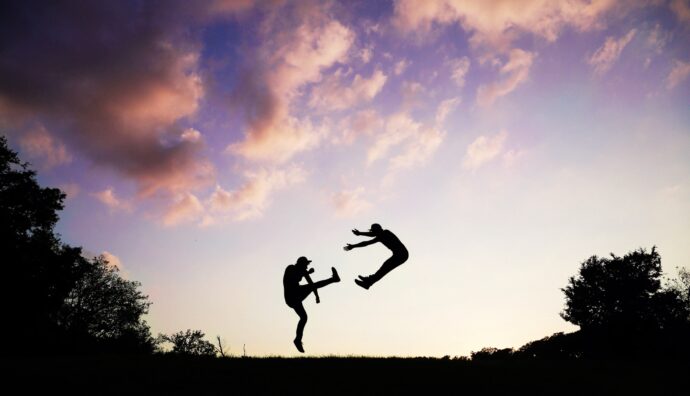 In these days the International Olympic Committee has decided that, starting from the 2024 Olympics, Karate will give way to the new incoming: Break-dance. The news can be an useful a stimulus for reflection, especially if made from the perspective of those who practice a martial art without competitions and competitions as Aikido is.

The Olympics’ trajectory of Karate was based on a coordination process of 188 national federations under the aegis of the World Karate Association, which began in 1993. Those who have a minimum experience of associative life (or simply of a meeting) can well imagine the effort to build unifying regulations, homogeneous competition calendars and everything that has in fact contributed to ensure that Karate could be included as an Olympic sport from 2016 to 2020 (better: 2021, given that the Tokyo Olympics were postponed due to Covid-19).

Yet something did not work, something was not enough. It was not enough to offer a movement of over one hundred million people, 10% of whom are members of national federations.

This is singular, because both Taekwondo, present at the Olympics since 2000, and Judo, veteran of the Games, albeit intermittently since 1964, together reach the number of Karate practitioners.

Numbers, however, very far from the 1.2 million Aikido practitioners reported by Aikikai.

Certainly the IOC assessments are inspired by broader criteria than a mere quantitative analysis. The fact that, despite the incredible technical level of Olympic karateka, kumite are often aesthetically very reductive and bordering on monotony, compared to the richness and spectacularity of the possible techniques, could be a key for a more accurate understanding. But it would be superficial.

Due to a kind of professional habit, faced with many organizational phenomena, I have always asked myself the question “where’s the money”. If you follow the money, usually, you will find reasons and explanations of phenomena that, with a different degree of awareness, determine the shape of what happens.

The spectacularization of sports has injected enormous amounts of money into the multimedia, marketing, merchandising and event management circuit. In certain sports and certain disciplines, the athlete becomes a real brand, a kind of company capable of enormous turnover. It’s a fact. It can hurt the sensibility of those who practice basic sport with sweat, passion and spending a lot of savings; however, it is not by denying reality that progress can be made.

No specific studies have been conducted on the global dimensioning of the “Martial Arts market”.
As for Italy, we know that there are about 2700 Martial Arts’ Clubs, with a global number of practitioners of about 550,000 people, of which 120,000 are athletes members of National organizations. Roughly estimating, assuming an average expenditure of 500 Euro per year for members and 300 for others, we have a reference market of 729 million Euro, to which should be obviously added the related markets (clothing, equipment , consumable items) that are the real target of marketing.

In other words: the turnover generated by the registration fees is important, because it keeps solid the backbone of the practice in the Country. But if a company would like  to sponsor a product to the martial arts practitioner, it should look at his/her spending willing directly and indirectly linked to what happens on the mat.

In the United States there are smart people… And in fact the American martial arts market has been the subject of study for some time by some groups of analysts. The approach changes, because, with a typical materialistic approach, we clearly speak about Martial Arts “Industry”.

The reports also show that the “cash cow” is, needless to say, Mixed Martial Arts (MMA). Annual spending on MMA-only equipment is estimated to grow to $ 565 million in the United States alone.

The reality of numbers, although linked to the particular case of the United States, places MMA, Brasilian Ju-Jitsu, Muay Thai and Kickboxing far ahead of all other disciplines. Karate is fifth, Judo tenth in the special ranking for “attractiveness and profitability”. Aikido, not listed.

It is therefore not surprising that the IOC makes apparently incomprehensible choices. What sense would it be to remove a discipline that has just been admitted to competitions? Well, the sense is there and it is quite evident.

Traditional Martial Arts are a basin in which the coexistence of Karate, Taekwondo and Judo would lead to a “cannibalization”. Whoever does marketing to a karateka is the same person who does marketing to a judoka: there would not be significant increase in market share.

If, after the pandemic, the aforementioned trends will be confirmed and consolidated, there will be no need to be surprised if we’ll see MMA matches at the Olympics.

So let’s try to draw some partial conclusions.

The question of “weight”, in some way of the representativeness of a discipline, is a complex matter, on several layers.

There are organizational, administrative and regulatory layers: these are the dimensions in which institutions and public bodies normally move.

Then there are the managerial layers, or those levels in which the institutions move (or should move) to favor and regulate the economic flows that the various movements generate. A desirable greater knowledge of the market by the institutions would allow a broader vision of the simple collection generated by sponsors.

Taking the United States as an example can be misleading: it is a particular societal pattern, with other rules and other sensitivities, far from Europe in certain ways.

Moreover, it is also misleading the image that amateur sport (in Europe) has a reference tax legislation that really facilitates sports promotion in a competent way. Those who manage a club witness the evolution of administrative complexity in recent times. And whoever tries to set up a mechanism whereby there is legitimation of the operators through the payment of something that resembles a wage, is in fact faced with a real entrepreneurial management.

Something Covid-19 has brought about; in general, at least in Italy, sports has seen in the federations a kind of facilitators for the correct understanding of the procedures related  subsidies. This could be the first step to bring together all the parties involved, also including those private subjects who can increase their business by means of a wider involvement with the audience and with the institutions that represent it.

In all sectors that have success and evolve, the continuous involvement of stakeholders is a constant that allows players to anticipate change.

The alternative is to have to explain to athletes that, due to force majeure, the next Olympics will be the last they can aspire to participate in.

Disclaimer Picture by SnapWire on Pexels.