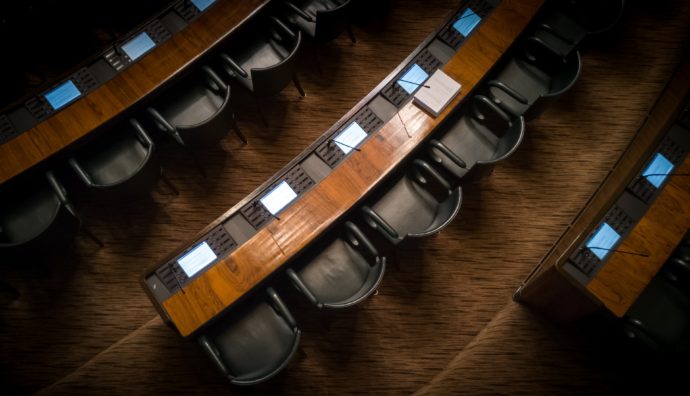 We have all been witnesses, at least once in a life, of situations degenerating because someone, at some point, had the bright idea of ​​speaking about that topic.

However, it seems useful to share some reflections about our being Martial Arts practitioners and their relationship with politics.

Politics understood as “impact in society” of what we do at the Dojo.

By working on oneself it is increasingly discovered that there is no “private dimension” of our existence. In other words, there is no possibility that our growth or our withering on ourselves will not have consequences even outside of us.

It is the same reason why if we meet the smiling gaze of a child we are instinctively induced to respond to the smile. Others impact on us. And vice-versa.

In many situations- the Dojo in which we train is one of these – we offer everyone a welcoming place that knows how to dialogue with educators, the world of school and psychotherapists to build shelters and network around subjects who live in uncomfortable situations and who, also thanks to martial practice, manage to take a few steps in the direction of a fuller life.

We know several teachers who work for people with disabilities. Many collaborate with the world of schools or parish communities to offer moments of social inclusion for boys and girls from other cultures.

Finally, those who have attended any course for children have been able to see how many needs there are from the world of families, that are experiencing crises of all kinds: material, moral, relational ones.

In bar talk, we may agree that … a serious government should do something. Or that politicians should solve the problems.

When, through Martial Arts, for us and therefore for others we offer hospitality, when we give shelter, when we help to rebuild a perspective, a sense and a little peace in relationships… At that moment we are doing Politics. Perhaps in the highest sense, also because we know how much gratuity there is in all this. (Yes, martial arts are not the fastest way to accumulate wealth.)

Politics understood as “diffusion of civil values” in which we believe.

It is natural to share what you believe with others. It is the principle that has inspired education between generations since the beginning of the human being.

However, in the 21st century we are not clones of our ancestors in caves, nor of our parents. Or, at least, we claim a certain identity autonomy.

The Dojo – understood in a broad sense as the world that lives around a martial discipline – is a particular environment.

On the one hand it works (in some places more, in other less) according to a strictly hierarchical approach. On the other hand, pretending to be the place where a “do” is practiced, a discipline, it is the environment in which sensitivity, introspection and respect in the relationship with the partner is developed more than elsewhere, in addition to the techniques.

The average user of a Dojo is therefore on average more sensitive to issues of respect and environmental education, social inclusion (as mentioned above), financial fair play, ethics in the rules, honesty in common living, of service and gratuity. Issues that, despite being the patrimony of humankind, have become flags of certain party areas over time. But on this we will be back into the conclusions.

In parallel, the average user of a Dojo literally relies on Sensei. Who, in turn, will have a set of personal values ​​on which the group’s building of values ​​will be consciously or not.

Without prejudice to the freedom of expression that an individual must enjoy, there is sometimes a phenomenon of assimilation. Typical of our animal nature. The alpha male publicly expresses his opinion or value and often the herd (or a large part of it) copies it.

Sometimes the opposite also happens: the alpha male says something and nobody follows him. But here we should ask ourselves other questions, for example asking ourselves on what conditions a leader is truly such. Maybe we’ll talk about it another time.

The herd effect is always ambiguous, although not necessarily dangerous. An average weak person can yield and never publicly express his dissent, thus giving value to his/her identity.  An opportunist person can do the same, fostering in the ashes of his silence the fire with which, speaking from behind one’sback, he can set the group on fire. The concept of freedom and self-determination, so inherent in the purposes of a do, can be nullified in the facts: “That guy does not agree with me, so he is nothing to me”. Finally, and worse: in environments rather reluctant to absolute truths, the absolutes are replaced with the “belief” (equally absolute) of the male (or female) alpha in turn.

Is this Politics? It certainly is. However, one must be extremely careful so that personal testimony does not become a hurdle for one’s own and others’ growth. The balance between shapeless pluralism and certain forms of absolutism (for example: the de facto nutritional habits imposed in some groups from Sensei to students only because maybe Sensei pushes the group on issues of environmental sustainability) is a difficult art and, we believe, the result of a path in progress.

Politics understood as “sharing the perspectives of the various political parties”.

Representative democracies are a system of management of our communities where, by delegating, the majority indicates (from a list of candidates), people responsible for making decisions for the community. To date, in recent history, this has happened through the aggregation into parties, which, in pure theory, indicating their program, present themselves to the “judgment” and approval of the electorate.

We don’t need to be a specialist to see the level of degradation of party politics. People who say everything and the opposite of everything, insulting, having little or no knowledge of the laws.

In short, a delusion.

Despite that many continue to be passionate about the topics discussed by people very far from our daily lives.

Basically we all are a bit fanatics. And maybe a martial arts practitioner believes on average more in matters of principle and values. The fact is that politics appears almost everywhere. In the changing rooms. In posts on social networks, sometimes on the tatami.

Martial Arts teach mainly to look inside ourselves to know each other and behaving coherently outside.

The insistence with which we talk about this or that politician, this or that party, this or that topic, generates the legitimate question:  really do you have so little to work on yourself so that you allow yourself the luxury of becoming a fan of this or that?

Trying to summarize the last four centuries of the history of western thought in a few lines, we can affirm that societies have slowly and inexorably erased the existence of objective truths, giving rise to subjectivism and relativism. At the same time,  a certain natural rationality or Nature was superimposed and then replaced to God, and the subsequent deism put the State and its laws at the center. In fact, replacing a religion and a faith with as many religions (governments / parties) and faiths (the underlying ideologies).

Let us quickly think about the various environmental movements, the “civil rights” movements and the recent electoral campaigns and we will recognize the signs of this process that comes from afar.

These are the origins of the current “liberal” thought, which is something veryt distant from the “do” rightly understood.

The match is actually played on the founding values, which those who practice go to rediscover from distant disciplines, and you can win or lose in personal action and change: which are always the turning factors for society, which needs examples, hands and smiles you can count on.